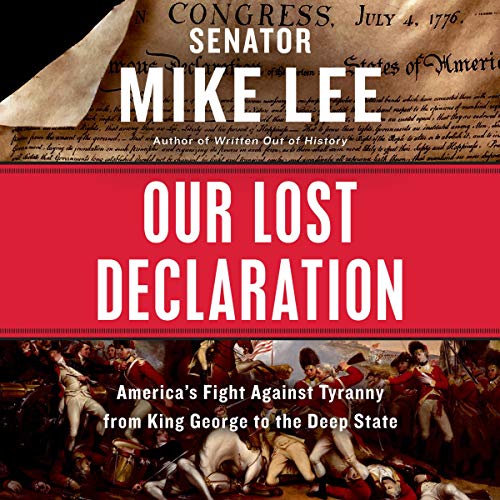 There is perhaps no more powerful sentence in human history, written in Philadelphia in the oppressively hot summer of 1776: "We hold these truths to be self-evident, that all men are created equal, that they are endowed by their Creator with certain unalienable Rights, that among these are Life, Liberty, and the pursuit of Happiness."

Despite the earth-shattering power of Jefferson's simple sentence and the document in which it is found, many Americans today don't understand or appreciate the Declaration's gravity. As a result, we have lost touch with much of what makes our country so special: the distinctly American belief in the dignity of every human soul.

Our nation was born in an act of rebellion against an all-powerful government. In Our Lost Declaration, Senator Mike Lee tells the dramatic, little-known stories of the offenses committed by the British crown against its own subjects. From London's attempts to shut down colonial legislatures to hauling John Hancock before a court without a jury, the abuses of a strong central government were felt far and wide. They spurred our founders to risk their lives in defense of their rights, and their efforts established a vision of political freedom that would change the course of history.

Lee shares new insights into the personalities who shaped that vision, such as:

Senator Lee makes vividly clear how many abuses of federal power today are rooted in neglect of the Declaration, including federal overreach that corrupts state legislatures, the judicial system, and even international trade. By rediscovering the Declaration, we can remind our leaders in Washington, DC, that they serve us - not the other way around.

“The Declaration was a death sentence to those who wrote it and signed it. Today it is nothing less than a death sentence to all those who do not read or understand it. This timely and critical follow-up to Senator Mike Lee's bestselling Written Out of History will quickly and clearly demonstrate how many truths that our country once described as 'self evident' are, today, anything but.” (Glenn Beck, host of TheBlaze and author of Addicted to Outrage, Liars, and Agenda 21)

“Every American, whatever their personal politics might be, can and should appreciate the genius of our Declaration of Independence, along with the struggle faced by Thomas Jefferson and his fellow founders to make this great experiment in democracy flourish. Senator Lee's new book expertly charts that experiment's dramatic and improbable beginnings.” (Sen. Joe Manchin, D - West Virginia)

“Senator Mike Lee wrote this incredible story of liberty’s founding moment with the same passion for America's history and first principles that he brings to the Senate. In this book, you’ll encounter rigorous argument, thrilling history, and invaluable insights into what it means to be a patriot today.” (Sen. Lindsey Graham, R - South Carolina)

What listeners say about Our Lost Declaration

I listened to this all in one sitting. I was driving tractor in a field all day with my head phones on. Really appreciated the history. Makes me know why I'm so proud of America's founding.

I would listen this again. I felt it was a well thought out book. The author took his time in research.

Any individual that loves their country must read this book. The Declaration of Independence has been forgotten and lost for far too long. Mike Lee's research is impeccable. The stories move the pages. A great ready for all patriots regardless if political ideology.

Relearned everything that was taught to me in high school when I wasn't paying attention!Passionate presentation inspired me to dig deeper into learning and defending our precious Constitution against those who seek to destroy it.

The telling of the story of our first national document which sets forth the founding principals of this nation should be required reading for all students, legislators, jurists and executives. In some cases the last three categories might need a quarterly refresher... maybe even before each decision, judgement and vote. Hell, I think in some situations they should be given cochlear implant and have the Declaration and Constitution on permanent loop until they leave office.

I would recommend ever High Schooler listen or read this book about our Declaration of Independence. Surely we would have more justice and less anarchy if t that were the case. Unfortunately, our young people and even adults are not aware of our founding principles and our God given rights . People are rioting and they don't even understand the liberty and freedom we are blessed to have. May God help us!

Historical storytelling at its finest providing deep accounts of major events and individuals involved in the Declaration of Independence with chapters devoted to the likes of Thomas Paine, Thomas Jefferson, Edmund Randolph, and more.

A Book of Sensible History

I look forward to having my son, who is 8 as of 2019, read or listen to this book. It is very informative while providing anecdotes which drive home the message.

Every Democrat should listen or read this to solely remind themselves of where our country, the greatest country in history, developed and overcame the adversities of their time. This book reminds us of the fear our forefathers had in relation to governments of any kind. It reminds us of the government actually enshrined in our constitution and need for all citizens of this country, regardless of political preference, should be wary of as states continue to succeed power to the federal government.

This book reveals hidden principles of our country’s foundation and shows how, though mostly forgotten, they are amazingly relevant and absolutely needed to solve today’s critical problems!