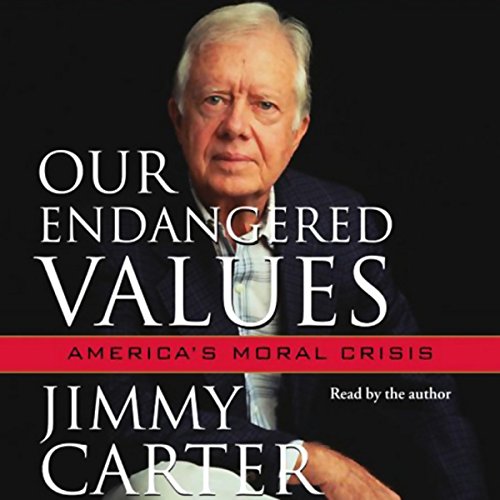 President Carter has written importantly about his spiritual life and faith. In Living Faith, a huge best seller, he recounted the values and experiences that shaped his personal and political life. In his companion book Sources of Strength, also a best seller, he meditated on fifty-two of the favorite Bible lessons he has taught.

In Our Endangered Values, Carter offers a personal consideration of "moral values" as they relate to the important issues of the day. He puts forward a passionate defense of separation of church and state, and a strong warning of where the country is heading as the lines between politics and rigid religious fundamentalism are blurred.

Now, he describes his own involvement and reactions to some disturbing societal trends that have taken place during the last few years. These changes involve both the religious and the political worlds as they have increasingly become intertwined, and include some of the most crucial and controversial issues of the day, frequently encapsulated under "moral values".

Many of these matters are under fierce debate. They include preemptive war, women's rights, terrorism, civil liberties, homosexuality, abortion, the death penalty, science and religion, environmental degradation, nuclear arsenals, America's global image, fundamentalism, and the melding of religion and politics.

Sustained by his lifelong faith, Jimmy Carter assesses these issues in a forceful and unequivocal but balanced and courageous way. Our Endangered Values is a book that his millions of readers have eagerly awaited.

"Carter speaks eloquently of how his own faith has shaped his moral vision and of how he has struggled to reconcile his own values with the Southern Baptist church's transformation under increasingly conservative leadership. He also makes resonant connections between religion and political activism." (Publishers Weekly)

What listeners say about Our Endangered Values

I found this book very interesting and with a humanistic viewpoint as you would expect from Jimmy Carter. He is definitely not in favor of current political policy and gives some background why he believes as he does. While it is a biased book, I found it worthwhile as another perspective on our current domestic and international situation. And, President Carter's reading of the book was warm and genuine.

A thoughtful and insightful work

President Carter does a wonderful job of putting into words many of the thoughts and feelings shared by those of us concerned about the direction this country is taking. Other reviewers here have called President Carter's views those of an "extreme Liberal agenda." As President Carter shows, his views are actually the traditional values upon which this country was founded. It is the current climate of intolerance, political repression and blurring of the distinction between church and state that are contrary to the princples upon which our nation was founded.

President Carter is one of our most admired former presidents. In this well-written commentary on the current state of our Union, Mr. Carter reminds us of our most cherished values AND points out ways to return to those roots. Anyone who considers themselves a serious Christian AND a patriotic American should read this book. In a time of war, torture, divisive social issues and mounting national debt, President Carter gives hope to the notion that America can rediscover its soul.

Jimmy Carter shows once again why he is the brightest president we have had. Insightful and full of well thought out answers to complex issues.

President Carter has written a real and insightful explanation of radical fundamentalism's impact on today's politics. The dangers of extreme right-wing thinking and political power cannot be ignored and need to be exposed. They were ignored 75 years ago in Germany, and the result was horrendous.

Those same tendencies exist today, in the USA, and they must not be allowed to reign free without check. This book is a wakeup call for all who have actually read and understood history that NOW is the time to act to forestall the inevitability of history's repeating itself.

President Carter addresses many issues our country is currently tackling. He is particularly critical of our current administration's desire to incorporate "their" religion into "our" government. He addresses the dangers of the path we are taking and how this path conflicts with our constitution and with the very religion professed by the administration. He covers many other issues including preemptive war, science and religion, environmental degradation, homosexuality, abortion, civil liberties, women's rights, along with many others.
His conclusion and the conclusion of many people throughout time is that fundamentalism is one of the most dangerous problems facing the world. The inability to be OK with someone else's point of view or someone else's way of life is simply a danger to the planet. Our country, like Europe during the dark ages, like modern-day Afghanistan, is being steered down a path desired by the fundamentalist. Saddam Hussein was smart enough to not get involved with fundamentalist Muslims. Our president believes that fundamentalism is the path our country should take and, as Carter points out, our president is using patriotism as a means to get the ignorant to not ask questions and to not think for themselves. As of today America is now more conservative than the nation of South Africa.

If you are interested in what a Nobel peace prize winning thinker has to say about the direction our country has taken, then this is an excellent read. If thinking is not your forte, then buy the book so that you can write a review of drivel. You can actually contact the White House or Fox News and find out what your talking points should be regarding this book. That way you and the rest of the storm troopers will all be in lockstep.

The recording quality itself is excellent.

Truly informative. An inspirational call to action for all who care about American values.

President Carter once again shows the intelligence and articulateness that earned him the Presidency. He puts forth a solid argument against the fundamentalism that is running rampant through the far right in America today. He uses scripture to completely debunk the idea that any Christian should support "Preemptive attacks".

It is good to read a solid argument from someone with real credentials in politics and religion.

a great citizen of US and the World

This is a GREAT listen. I wish my writing skills for this review could do justice to his book.
He does not pull any punches going thru dozens and dozens of hot topics from Abortion, Iraq, Korea, Executions, Poverty, Religion... Each is discussed with background, facts, bible quotes for and against and a idea where this current direction will take us and ways to handle the problem more effectly.

He's a bible scholar and STRONG christian; One issue he discusses is abortion which he is against. He comes up with many great middle ground ideas. Did you know that 2/3 of women get abortions because they cant afford the kid. The current administation is actually causing more abortions with this bad economy, no health care and all the other ways it is draining money from the middle class family. Any idea why abortions are way up from the clinton years.

Straight from the news today, he talks about why Bush should not give nuclear help to India. (If you couldnt think of a few reason yourself)

To steal a statement from another reviewer
"If you are interested in what a Nobel peace prize winning thinker has to say ..."

I also listened to his book "An Hour Before Daylight: Memories of a Rural Boyhood", which was great. Very much like the painted house.

Mostly good with some bias

I have great respect for President Carter and his commitment to integrating faith and public service. I enjoyed hearing about the experiences that shaped his character. This book makes some good points about social justice as a moral value that despite its strong roots in Christian theology has been undervalued (ignored?) by many politically active fundamentalist Christian leaders. As someone who, like Mr. Carter, grew up in a Southern Baptist church, I was especially interested in his descriptions of the movement of the SBC away from traditionally held Baptist beliefs.

Unfortunately, Mr. Carter's treatment of the Iraq war, torture allegations, and defense spending amount to a partisan attack on the Bush administration. If you dislike Bush you will probably be cheering along with these passages, but I found the lack of balance and constructive criticism on these and other issues disheartening. For more practical insight into foreign policy in the Middle East I would recommend reading Thomas Friedman; for a more balaced look at torture allegations, read Inside the Wire by Eric Saar. I was also disappointed by his treatment of economics in relation to moral values. For example, he criticises the low minimum wage in the US compared to European countries, but fails to mention Europe's high unemployment rate and relative economic inflexibility.

Mr. Carter's left-leaning foreign and domestic policy positions are no doubt deeply rooted in his understanding of Christianity and I agree with some of them in principle, but ultimately he proves his point that it is perilous to mix church and state. Unfortunately we live in a fallen world and positions that are morally justifiable for individual Christians do not always translate well into national policies that preserve and protect the prosperity of a pluralistic free society.