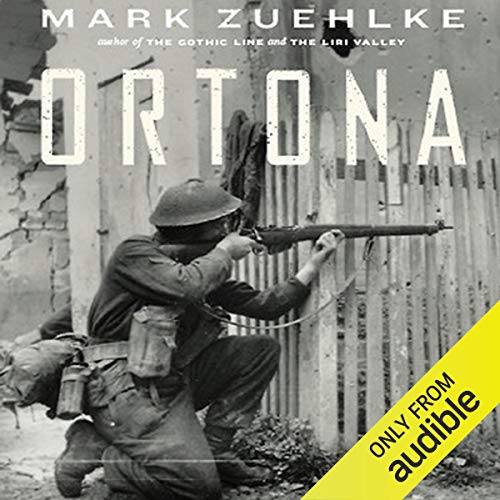 By: Mark Zuehlke
Narrated by: William Dufris
Try for $0.00

In one furious week of fighting in December 1943, the First Canadian Infantry Division took Ortona, Italy, from elite German paratroopers ordered to hold the medieval port at all costs. When the battle was over, the Canadians emerged victorious despite heavy losses. Over 2,500 Canadians died or were wounded there. Military historian Mark Zuehlke blends reminiscences of the Canadians, Germans, and Italians who were there together with a blow-by-blow account of the fighting to create a harrowing, ultimately hopeful rendering of one of World War II's defining moments.

What listeners say about Ortona

I enjoyed this book very much. We usually don't hear about what other countries did in WWII.I would recommend this book to others.

Another great read. Mark sets a high bar for everyone of his books and meets it every time. I really enjoyed this one and is a must read for all Canadians.

Thank you for writing and narrating this piece of history in such a professional manner.

This book is a great history on the events at Ortona. I heard the names of many find Canadians known to my forefathers that fought in Italy. Thankful that the author and a fellow regimental officer, Mike Boire took the time to capture this costly battle in Canadian. history. Bravo Zulu.

I enjoyed this audio book very much. The story of what the Canadians went through to break through the German lines was one I only heard of from my mother as my grandfather passed away when I was five.
While the performer did mispronounce some Canadian terms and institutions, his tempo and pace kept you on the edge of the story as it progressed.
I would recommend this book to all people who want to understand what it was truly like in the Second World War. It was not the glamor that we see in the old movies.
Thank you for producing this.

Ortona the Story I didn't know

I was amazed that I hadn't heard about the epic battle in Italy and the heroic efforts by Canadian troops including the Loyal Edmonton's...fantastic and fantastically narrated!

This book is a well put together and written account of the Canadian battle for Ortona.

What is notable is that a non-Canadian narrator was selected. names of institutions and places are badly mispronounced, and he continuously pronounces 'lieutenant' in the American way, rather than that of the Commonwealth (pronounced: Lef-tenant)". As other comments mentioned, he also struggles at times with common English words.
These mistakes take away from the story, and make it feel less of a Canadian Epic, and more of an American teacher trying to give you a history lesson.
Great piece of literature, but maybe next time have a Canadian read a Canadian book by a Canadian author about a Canadian battle.

What was one of the most memorable moments of Ortona?

Christmas Dinner with the Seaforth Highlanders, the Fallschirmjager defense of the city, "mouseholing" technique developed by Canadians in order to advance through the city.

He is very distracting, almost as if his voice were constrained and reading were difficult to do. He seems unable to speak many common words, such as "the." He sounds clipped and awkward, and some sentences are almost unintelligible. I will never listen to a story narrated by this man again.

Did Ortona inspire you to do anything?

I am a WWII reenactor, and am now more enthusiastic in efforts to portray at a reenactment the Canadian infantryman.

Great story following the 1st Canadian Div and describing a lesser known battle in the Italian Campaign. The story was ruines by the narrator. Sounded as if his voice would give out and was very distracting and hard to listen too. Will never listen to another book narrated by him