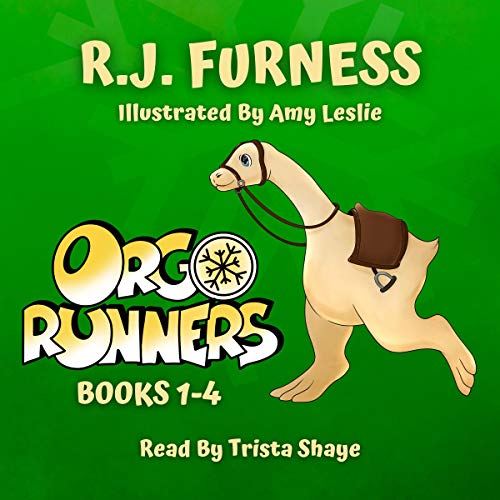 Being great at something isn't always a good thing!

Prepare to be gripped! Follow Fayth and her friends, along with their orgo companions, on their first four dangerous missions. Plus, get an exclusive sneak preview of book five!

The First Run (book one)

Fourteen-year-old Fayth is a champion! Along with her friends, she races animals known as orgo in order to survive the aftermath of a new ice age. But when Fayth’s friend is caught stealing, she has an awful choice to make.... Join Fayth, Ink, and Megg as they embark on their first deadly mission with their orgo companions.

The danger had only just begun.... As champion orgo racers, Fayth, Ink, and Megg were chosen to transport food supplies. Yet, they had no idea how much danger they faced. Join them on their second mission to Scorr Tanta. Along the way, they are ambushed by a mob of greedy gliders from Eklips territory.

Doing the right thing could risk their lives.... Fayth, Ink, and Megg have a difficult choice to make when an enormous sea creature gets stranded at the harbor! Megg wants to make sure that the seacrawler is safe, and she'll do everything she can to help it. But, when Fayth chooses to help Megg instead of going to work, she manages to get herself into a heap of trouble with the wardens.

Legend of the Orgo (book four)

Find the answers you've been looking for.... When Ink's orgo becomes ill, he asks Cedric to help her get better. But during their visit to Cedric's barn, both Ink and Megg get more than they bargained for. Through Cedric's stories, Ink and Megg learn about how the orgo evolved, and it isn't what either of them expected! Join the Orgo Runners as they find out about Tobus, Calli, and the legend of the orgo.

Be there when a group of angry whomphorn escape Eklips territory. What will happen next?

This book sounded really exciting, a post apocalyptic world after another major ice age.
It certainly had great potential, the characters just weren't that interesting & sadly neither was the story.
I recieved this book free of charge in exchange for an unbiased review.