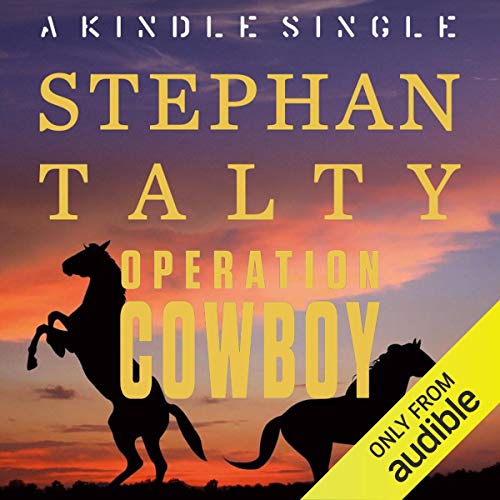 By: Stephan Talty
Narrated by: Wes Talbot
Try for $0.00

A thrilling account of one of the strangest and most daring military operations in history.

In the final days of World War II, with the ravenous Red Army marching across Czechoslovakia, a wily band of American soldiers did the unexpected: They teamed up with the Nazis and went behind enemy lines to save the world's rarest horses from imminent extinction at the hands of the Russians - including the exquisite white Lipizzaner, whose bloodlines date back to Genghis Khan. Based on personal interviews and new archival research, New York Times bestselling author Stephan Talty recreates in vivid detail the exhilarating rescue mission, led by unlikely heroes who just "wanted to do something beautiful."

What listeners say about Operation Cowboy

A Must Read for History and Horse Lovers

Wow! Thank you Stephan Talty for sharing this story from World War II. I saw the Lipizzaners perform when I was 12 or so. They were incredible, but I'd never have seen them if not for Operation Cowboy that saved the Lipizzaners. I did not know the price paid to keep the breed alive. Two American servicemen died in the operation to save the horses and this magical breed. I will be forever grateful for their sacrifice as are horse-lovers everywhere. The Disney movie - wrong. This book tells the real story. Thank you, again for preserving this important piece of history.

learned more about the war and things that took place during that period. I never thought about the horses and the how some of them survive.

A good story telling how a group of soldiers heat about the prized and the rare breed of horses will need rescue or face being made into chow by the Red Army.

Operation Cowboy is a unique bit of history

The saving of Lippizaner horses in WWII 1945 was a secret mission and one barely known to people-then or now. It's a lovely story for all whether strictly history buffs or lovers of horses/animals.
It's a short story (about 2 hours) and worth every minute of your time. The narrator is pretty perfect in my estimation and the production fine. This should be made into a movie with the quality production of the "monuments men," definitely not the Disney fantasy of years ago.
Enjoy.