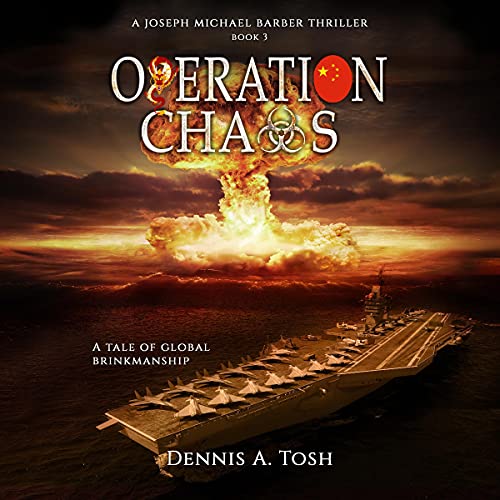 The dragon is rising. An ascendant China has decided it is time to grasp their reunification dream - the seizure of Taiwan. First, they must take the United States out of the game. They develop a plan to attack America and frame Islamic terrorists. With the United States 100 percent focused on the aftermath of the attack and retribution against ISIS, China believes their hands will be free to achieve their destiny. Once again, Joseph Michael Barber and his partner, Marcus Day, are reluctantly drawn into the action. Several attempts on Barber’s life, made to settle old scores, are botched. As the killers and their motives are pursued, clues to China’s plan are revealed, making Barber a liability.

With the help of his friends at the CIA and FBI, Barber relentlessly pushes for the truth and begins to unravel the multi-faceted nature of China’s treachery. It is more terrifying than he imagined - a bioweapons attack followed by the detonation of a nuclear weapon over the American heartland. A new, young and accidental President, still growing into the role, is suddenly faced with the most consequential decisions any human being could face.

From the halls of power in Washington DC, Beijing and Moscow; from North Korea to Malaysia to the Philippines; from the cockpit of a “go-fast” boat and the Combat Information Center of a US aircraft carrier in the South China Sea; and to deep inside an old, repurposed Titan missile silo, Operation Chaos delivers a tale of global brinkmanship once again ripped from today’s headlines.

What listeners say about Operation Chaos

China looking to reunite with Taiwan and the United State standing in the way. What story could be more exciting? This audiobook contains nonstop action, locations spanning the globe, and plenty of plot twists and turns keeping the listener at the edge of his (or her) seat. Hard to put this one down. The narration is excellent. Every word clear with varying inflection and tone. Third in the Joseph Michael Barber series.