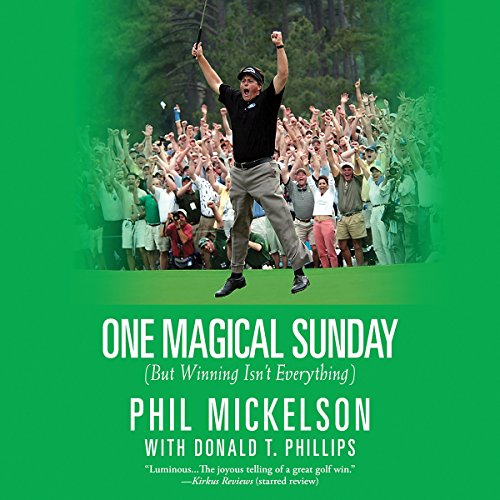 Every year, he came so close only to fall short. Every year, the dream grew larger, only to fade away. Yet every year, his gallery of fans grew in support of his quest. Then, on April 11, 2004, for the most beloved golfer of the decade, everything changed. It is a moment ingrained in the hearts and minds of millions, a moment of epic triumph and destiny fulfilled that will be remembered for the ages. But for Phil Mickelson, winning the 2004 Masters was merely another step in an odyssey that began many years ago. Born into a sporting family, with a putter drawn on his birth announcement, Phil knew early on that golf would always be his passion. His parents embraced and nurtured that dream, but they taught him that winning isn't everything.

In One Magical Sunday, Phil Mickelson takes us on a magical journey inside a life few have seen up close, but a life whose lessons can be cherished forever. As we travel hole-by-hole through that triumphant Sunday at the Masters, Phil looks back at the influences that made him the man he is today: his mom and dad, who mentored him on the balance between family and golf; his wife, Amy, who has given him so much happiness and fulfillment; and their three children, who remain their top priority.

With personal insights from Phil's family, One Magical Sunday is an audiobook not only for Phil's millions of fans, but for everyone who finds inspiration in learning about a champion on and off the course.

What listeners say about One Magical Sunday

What is truly special is the points of view added by friends and family members.

This book is an Eagle, possibly a hole-in-one.

I liked it but I didn’t like some of the performances. Nice concept though with different holes