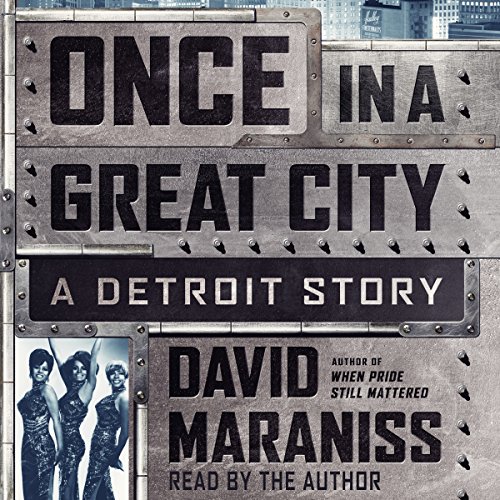 Once in a Great City

As David Maraniss captures it with power and affection, Detroit summed up America's path to music and prosperity that was already past history.

It's 1963, and Detroit is on top of the world. The city's leaders are among the most visionary in America: Henry Ford II, the grandson of the first Ford; influential labor leader Walter Reuther; Motown's founder, Berry Gordy; the Reverend C.L. Franklin and his daughter, the amazing Aretha; Governor George Romney, Mormon and civil rights advocate; super car salesman Lee Iacocca; Mayor Jerome Cavanagh, a Kennedy acolyte; Police Commissioner George Edwards; Martin Luther King. It was the American auto makers' best year; the revolution in music and politics was underway. Reuther's UAW had helped lift the middle class.

The time was full of promise. The auto industry was selling more cars than ever before and inventing the Mustang. Motown was capturing the world with its amazing artists. The progressive labor movement was rooted in Detroit with the UAW. Martin Luther King delivered his "I Have a Dream" speech there two months before he made it famous in the Washington march.

Once in a Great City shows that the shadows of collapse were evident even then. Before the devastating riot, before the decades of civic corruption and neglect and white flight; before people trotted out the grab bag of rust-belt infirmities and competition from abroad to explain Detroit's collapse. From high labor costs to harsh weather, one could see the signs of a city's ruin. Detroit at its peak was threatened by its own design. It was being abandoned by the new world. Yet so much of what Detroit gave America lasts.

What listeners say about Once in a Great City

Detroit in its Heyday

Would you consider the audio edition of Once in a Great City to be better than the print version?

I consider the print version better because the material is interesting, but the author's narration is boring. He has a bland voice, and he reads in a monotone. It distracts from the content.

It could have been read by someone else.

The Detroit That Was

Yes - this book is a fantastically written, well-detailed, well-researched story describing Detroit on the cusp of its current modern history.

Who would you have cast as narrator instead of David Maraniss?

Anyone but the current narrator. This reader was THE WORST AUDIOBOOK READER I'VE EVER HEARD.

Some congested, monotone, OBNOXIOUS sounding reader ruined the listening experience for me.

For those interested in Detroit or urban history, this is well-written book, focusing on themes of the struggles of the African-American community for equal rights, the rise of Motown, the UAW and the automobile companies, the Detroit mafia, and the failed bid to land the 1968 Olympics. But I am a Detroiter, so hearing the names of familiar people and places was part of my enjoyment of the book.

I am the same age as the author but grew up several miles north of him in Detroit. I remembered some of the things he described in those pivotal years, and knew many of the stories; as an adult I got to know the union and political figures he talks about and know the places he describes. I very much enjoyed the book and learned a lot about the city I call home and it's place in, and influence on, the larger world. Detroit is resilient and working to be great again

Good. Well researched. A Motown love letter. In the audible version there were a few production flaws, I think.

History in the making

This book highlights Detroits coming of age and evolving throughout the future. This book highlights the hardships thought history and how it became the center of innovation and civil rights and culture if the United States. We learn about great figures that have visited Detroit or are Natives of the city, and how they helped shape history.

Perfect Title for this Superb Read

Someone should make a movie of this well-written book. The author does a remarkable job showcasing one particular year in history in the city of Detroit. I don't agree with some of the others stating terrible narration. Sounded more like an instructor who knew his subject well, and I got lost in the great content of the story and didn't need any additional bells and whistles.

Worst reader I have ever heard. Couldn’t finish because of the horrible job reading by the author. Good story but to hard to listen to.

A must for any Michigander. Amazing details filled in many gaps from parents and grandmother. All the behind the scenes motives and facts beyond the rhetoric gave me newfound respect for many of the key people in Detroit, Michigan and the country.

I have heard that this is a good book. I stopped part way into chapter one. I have perfect hearing, I couldn't make out the words in this recording unless I really concentrated.