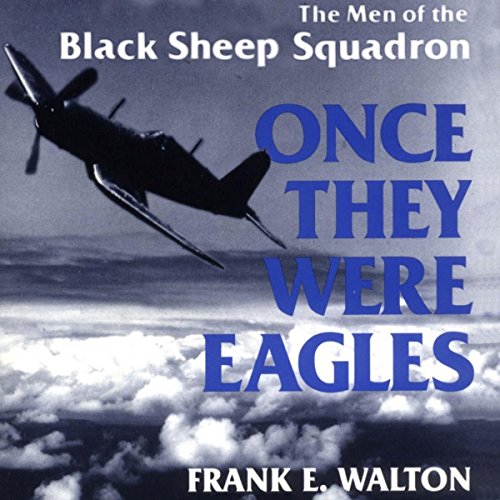 Once They Were Eagles

By: Frank Walton
Narrated by: David Randall Hunter
Try for $0.00

Marine Corps Fighter Squadron 214 was hastily organized in the field during World War II to meet the urgent need for another combat squadron in the South Pacific. The squadron, self-named the "Black Sheep", went on under the leadership of the swashbuckling "Pappy" Boyington to become the most famous in Marine Corps history. Now comes the true story of the Black Sheep Squadron and the men who wrote its record in the Pacific skies.

Once They Were Eagles tells how and why the squadron was formed, provides brief sketches of every member, and creates a vivid picture of the exciting but deadly aerial sorties over the South Pacific. Frank E. Walton located the 34 survivors of the 51 original Black Sheep. In a unique series of interviews, former "Eagles" share their recollections of those days of high adventure and their experiences in the years to follow.

"A study of immense value of how Marines battled the vaunted Japanese Zero and emerged victorious." ( Leatherneck)
"A fascinating study of the overnight development of a diverse group of American youth reacting with shock to the attack on Pearl Harbor." ( Marine Corps Gazette)
"A new and refreshing look at this truly remarkable fighter pilot-'Pappy' Boyington-and his squadron." ( Military History)

What listeners say about Once They Were Eagles

great insight at the leyendary squadron

it gives you a different view into the story of the black sheep squadron not only it addresses the tours but it gives you a more broad look at the menu that served and their stories.
nice to see a tale that is not overexagerated

I really liked the story and history of this book. This narrator just ruined the audio version of this book!
Punctuation has a purpose for a reason! This guy doesn't do anything but take a breath and let it pour our. Almost lime an auctioneer!
Sad, really disappointed!

Great Story but Narration Lets it Down

I love everything about the Black Sheep Squadron and this book is no different. Very informative and written from an insider perspective, it provides a good picture of the Pacific war. However, the narrator doesn't seem to know what a period or comma is supposed to mean and it feels like one long run-on sentence. The upside is the book is done in record time!

it sorted fact from fiction

The book was spotty