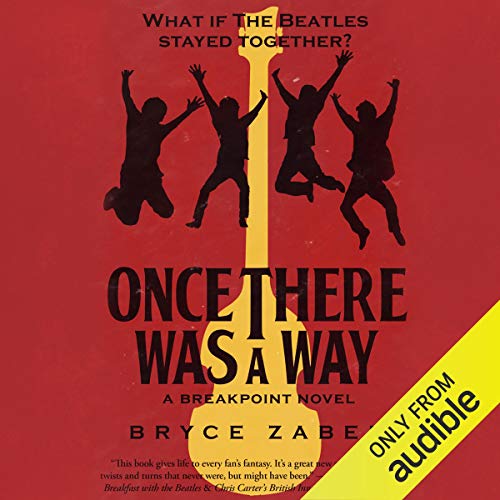 Once There Was a Way

By: Bryce Zabel
Narrated by: Gerard Doyle
Try for $0.00

The next novel from author Bryce Zabel, whose debut, Surrounded by Enemies: What if Kennedy Survived Dallas? won the coveted Sidewise Award for Alternate History.

"We know The Beatles let it be, but what if they worked it out instead? This book gives life to every fan's fantasy. It's a great new adventure full of twists and turns that never were, but might have been." [Chris Carter, host, Breakfast with the Beatles and Chris Carter's British Invasion (Sirius/XM Radio)]

We all know the tragic story by now. After seven years as the most popular rock-and-roll group the world has ever seen, the Beatles - torn apart by personal and creative differences - called it quits in 1970, never to play together again. The fact that their contemporaries like the Rolling Stones are still playing today makes their ending even more painful.

Once There Was a Way: What if The Beatles Stayed Together? is a story of another reality, the one we wish had happened, where the Fab Four chose to work it out rather than let it be. This book is no mere fairy tale but a chronicle crafted from the people and events of our own history, shaped to create a brand-new narrative in which John, Paul, George, and Ringo find a way to stay friends and keep the band together. Imagine there was more. Lots more. It's easy if you try.

What listeners say about Once There Was a Way

Love this book, mind changing on a familiar band

This Book Is a Grand Slam 10/10
Im so happy that i got audible because i haven't read a book in a long time and i found this fiction, What-If, Alternate History book "Once There Was A Way" by Bryce Zabel and its a very Magical Book if you ever get the chance to Read/Listen(Like I do) this book, I Highly Recommend it and If you like the Beatles or.love the Beatles you'll just love this book and if you just know of the band,But don't fell any kind of way towards them, you'll still fall into the story telling, What if fantasy roller coaster you'll still love this book, I never say this but this I a must read but be patient it is 10 hour listen but worth everything minute doesn't drag the pacing is a bite slow but it totally works with this type of book

If You Love The Beatles, You’ll Love This Book!

I know a lot about the Beatles, and this book was both gratifying and surprising. It feels so real that you will be amazed at how this author has seamlessly woven this amazing story. The story, the details and the love that has gone into this will just blow you away! Give this a chance!

I started this as a mild amusement, wasn’t expecting too much...just a fun thought experiment. I was happily blown away. Zabel skillfully weaves together bits of reality with an imagined possible history. A Beatle fan since 4, I found myself welling up at times. I was empathizing with some of the happier, positive moments that never happened, but could’ve. The ways that they could’ve affected history. The idea of John, Paul, George, and Ringo keeping the Beatles together for so much longer warms my heart. Excellent book.

No spoilers, I promise! The fun about alternative history is that the writer can create almost any possibile scenario for his/her subject, no matter how unbelievable or seemingly improbable. This book does just that in many ways, and in so doing gives life to the thought "if only!" The "if only," of course, is what COULD have happened if The Beatles had stayed together.

I was born the year the Beatles arrived on the shores of the USA. As a child I really have no recollection of them as an active group. However, a gift of the "Rubber Soul" album in the 70's started me on a lifelong path of fandom. I, like countless others, have often wished for a world in which The Beatles lived on.

This book gives us one potential reality. Of course, there could be an infinite number of variations to this story. However, this particular telling is fun, engrossing, and entertaining. The research is excellent. The potential storyline is truly imaginative. The performance is spot on. I really believed I was hearing the voices of the Fab Four throughout.

I highly recommend this book. The impact The Beatles had on culture is demonstrated in some creative ways. For me, this was an excellent example of "if only" come to life.

A wonderful fictional journey from the time of The White Album to 2013. Expertly woven with what actually did happen with what could have happened had they stayed together. The author completely captures the personalities of the Fab Four. The narrator's interpretation is masterful, expecially when he does Yoko. I've listened to this book twice in 3 months, and have given it as a gift. The only negative is a cheap shot at the current president and his departed press secretary. Has no place in this great story. I don't understand why this interjection was necessary, except to make the author popular amoung his literary friends. Not why I buy books.

Peace and Love to The 21st Century Beatles

I read a lot of alternative history, and was skeptical this 50-year retrospective on a Fab 4 that never broke up could work. But Bruce Zabel pulled it off. The point of departure (Jonny Carson returning to New York for John and Paul's appearance on the Tonight Show) was imaginative and effective. Zabel wasn't afraid to speculate but kept the flights of imagination grounded in plausibility (mostly). At the end, I found myself genuinely feeling nostalgic for a vivid exit from a 1975 stage that never happened! A clear sign of effective Alt-Hx. Note: it does help a good bit to be a solid Beatles fan.

Fantastic and believable what if. Gripped from the first minute.

Narration excellent and appropriate to the style.

it was very interesting and captivating

I enjoyed listening this book. It's an alternative time line, of course, a "What if" story, but the characters were true to the real people and the narrator was great with the accents. There was, by the end, some characters that I didn't find quite believable, nor the final chapter but that's got to do with what each person thinks that could have happened. But in general I liked it.