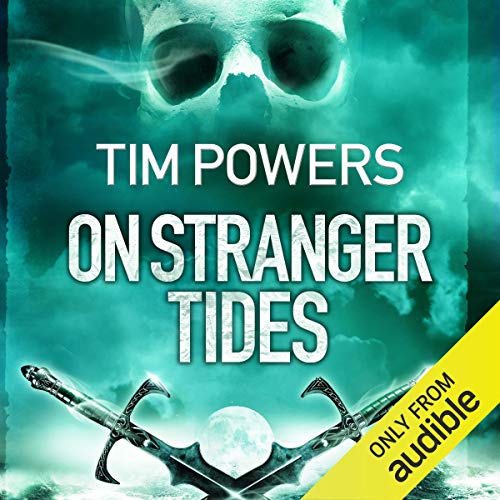 By: Tim Powers
Narrated by: Bronson Pinchot
Try for $0.00

On Stranger Tides follows the exploits of John Chandagnac, who travels to the new world after the death of his puppeteer father to confront his uncle, who has apparently made off with the family fortune. During the voyage, he befriends Beth Hurwood and her father, Benjamin Hurwood, an Oxford professor. Before they arrive at their destination, their ship is waylaid by Blackbeard and his band of pirates. With the help of the professor and his assistant, the captain is killed and Chandagnac is pressed into piracy and sorcery as Blackbeard searches for the Fountain of Youth. Chandagnac, newly dubbed Jack Shandy, must stop the evil plot and save Beth Hurwood.

Tim Powers is the author of over a dozen novels, including The Anubis Gates, Declare, Last Call, and Three Days to Never. He has received the Philip K. Dick, World Fantasy, and Locus awards. He lives in San Bernardino, California.

What listeners say about On Stranger Tides

Before purchasing this book I had a big bottle of rum, was playing the Assassin's Creed Black Flag game and reading the Live Ship Traders trilogy by Robin Hobb. So Audible was the only aspect of my entertainment that I did not have pirates in. So, naturally, I had to remedy this.

I hunted for a good novel and was pointed to this one by multiple people. I can safely say that I was hugely impressed. The narration is excellent and the characters are well-written, as is the story. It had me wishing I was back onboard a cruise ship so I could feel the waves beneath me.

Needless to say I'm a bit of an ocean lover. For any out there looking for a good pirate tale, I would highly recommend On Stranger Tides. It features real people from the era such as Black Beard and Steed Bonnet etc...

And, on a very positive note, it is far better than the film that was based upon this book.

Well worth the price and a steal if you have a free credit.

This kind of thing is not my usual kind of read but I was really glad I made a departure from my usual fare. I wouldn't have tried it out ordinarily but it was mentioned by Patrick Rothfuss and I like his books, so I took a chance and was pleased I did. I was really surprised how much I enjoyed it - an all round excellent read very well narrated. It's a really pacey tightly written tale, not a slow moment and no padding. Has all the right ingredients with great characters and a captivating story. What else can you ask for?

What's not to enjoy in a book about pirates, evil magicians and a man on a mission to recover his stolen inheritance and save the woman he loves? The story is intricate and engaging with good characterization and manages to avoid clichés.

I loved the historical and nautical details and cameos from historical figures. Big shout out to my girl Anne Bonny!

The narrator is mostly fine. Jack Shandy's accent slips a bit between French and German but not so much that it's distracting.

Great story. Good reader but his French accent makes the protagonist sound a little like Arnold Schwarzenegger instead of a Frenchman

This is a fun and easy read/ listen, would recommend as a holiday book. I enjoyed the first part of the book a lot more than the second as the romance is a bit boring and tedious- and unnecessary in my opinion- and the storyline gets proceeds to incredible levels of ridiculousness HOWEVER it was fun and kept me entertained.

Bronson Pinchot is a wonderful narrator and I will listen to more of his work. Tim Powers is quite a story teller. Worth your time!

A very enjoyable romp that kept me interested . well narrated with some good accents and characterisation

The main thing that spoilt the book was the narration with accents / voices inconsistent.
When the narrator was narrating the part of blackbeard the low volume mumbling could only be heard by increasing the volume substantially which was booming and unecessary for the next character.
The story was over long with scenes particularly fighting scenes just seeming to be repeated.
Disappointed as I was looking forward to this and unfortunately just didn't suit me.