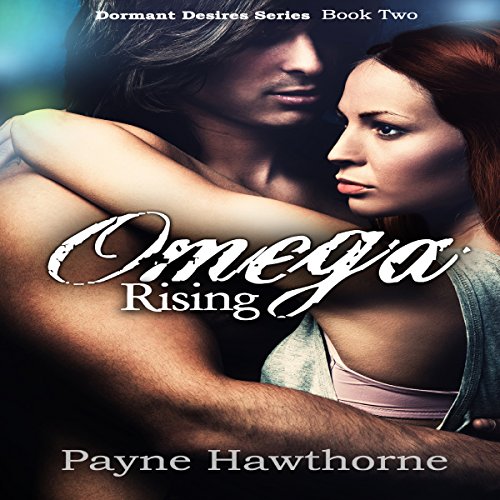 We first met Jacob and Allison in Alpha Awakened and traveled through a harrowing year of revelations. Their fierce passions that brought them together in a torrid moment in time, and then the separation that left Jacob on the brink of insanity and Allison in a spell like trance the doctors called a coma.

In Omega Rising, they are reunited in Alaska and must now face uncharted territory as their dormant lycanthropic blood is awakened. They have been welcomed into a burgeoning family with similar genetics and as the next full moon approaches they all prepare for dramatic, and life altering events to unfold.

This book is about the passionate affairs of unsuspecting individuals thrust upon each other and unable to fight the magnetic draw they both feel. Time, distance, and even mythological forces cannot keep them apart in this journey of mated love.

"Aside from the mythology and lore aspect that these creatures did in fact exist, and aside from the fact that she was apparently one of these creatures, and actually mated to another. Yeah, aside from all that hooey, she was just a bit excited. For the first time in her life she felt as if she belonged. There was a family downstairs that wanted her, an impressive man that desired her, and to top it all off, she was somehow integral to their pack balance. So yeah, she was into this.

She would no longer be forced to merely survive. Maybe, now she could thrive and become all she was meant to be. Bring it! She nodded at her reflection one more time, checking that her hair was up and tight against her scalp. As tight as that much curly hair could get, and she left the bathroom on a mission. Lets get bit!"

What made the experience of listening to Omega Rising the most enjoyable?

Being able to listen to the book allowed me to just kick back, relax and soak in the entire book without distractions. Joshua Story's voice is soothing and allowed me to concentrate on the story itself.

What was one of the most memorable moments of Omega Rising?

Their mating is one of the most memorable moments in this book, even though there are many throughout the entire book.

What does Joshua Story bring to the story that you wouldn’t experience if you just read the book?

His wonderful voice. His accent makes you want to melt.

This book made me cry and laugh. It makes you ache for the two main characters of Jacob and Allison with all of the hurdles they have had to jump to get where they are now.

I love this series and can't wait to read/listen to the final chapter. Payne has an awesome imagination, and she has dug deep within to come up with this wonderful series. This is definitely a winner in my books and would recommend to anyone interested in the paranormal/shifter genre.

What did you love best about Omega Rising?

Allison and Jacob were awesome and I loved how the story continued. The narrator's accent is great and we all know with audiobooks, it's really all about the narrator. If the narrator isn't good, it makes the book not good. I hadn't read this one ahead of time so listening was my first time. Highly recommend! Great job, Payne! Keep them coming!

Made me (a sailor) blush!

If you thought the first installment, Alpha Awakened, needed more graphic sex scenes - found them! All I can say that really describes it is ... Holy Crap! Yeah, Jacob may be the hot, fantasy guy all the women are looking for. Screw that, where's my Allison? I need a woman with her ... ummmm ... talents!

Okay, about the story. Besides all the graphic sex, I love the story line. Matthew's odd behavior with Allison makes sense now, which is good. I was thinking he may have been some type of ... predator. :) The pieces fall into place from Alpha Awakened, but a new spin sets up the next book, Lumen.

Payne must have a great imagination, it shows in this series!

I love this family and I love how the author writes it so I feel I am living there with them! I have read all three but couldn't wait to listen since I am more a listener than a reader.

The narrator did a great job with the accents although there were places that felt awkward to me. Not sure if that was the writing style or the narration. Sometimes with narrators it stems from a place of them not being readers--delivery is everything! I am kinda spoiled because I am such a huge fan of Kresley Cole/Robert Petkoff and the immortals after dark series. I will still give him 5 stars because I freakin adore a book with accents and this kind of performance.

Can't wait for more from this new author/narrator combo.

You've never read a shifter book like this one!

This is part two in my Dormant Desires Series and when we finally get to dwell within the pack structure. The Alpha and Omega are reunited. There is harmony and balance now as Jacob and Allison get to know each other.

We get to know Allison and her comedic, stress alleviating Omega self, as well as a balanced Jacob as both learn how to navigate around their new shared passions.

This installment really lets us get to know the entire family as we experience their first shifts and a life on four paws.

I hope you enjoy listening as much as I am enjoying writing this series. I am working on a fourth book right now, Dormant Desires, CAIN. Please look for part three, LUMEN already available on Audible.com. All of my titles are also available in print and e-books on Amazon.

Part 2 is only half as good

This has the making of a great story. A twist on the werewolf legend. An epic love with a Scottish billionaire. A pack transformation. But the narrator is awful and the female voices are horrendous. Really wasted a credit. Plus it's available as one novel for half the price. Don't recommend.

Not as good as the first book...

What disappointed you about Omega Rising?

Book 2 is about Jacob and Allison learning about what and who they really are, and growing into their new roles in life. Jacob has had more insight than Allison because of his time spent with his Uncle James. So it is understandable for Allison to react and act in the manner she had in the book, but I feel the delivery was wrong. The way Allison and Jacob interacted with one another came across immature in their dialogue. I also felt like their was too much detail to their transformations. As a reader, I did not feel like I needed to hear them discuss in detail how he needed to f*&! her, or claim her, or call him dude, and say the word f?#$ when not necessary. I am not a prude, but I feel the word f*&@ should show an intense moment or feeling to something or someone, not just as part of casual conversation cause you can. Many times in books involving shifters, most of what happens between the "Alpha" and his mate are instinctual. They act upon their instincts, and we do not hear them discussing the how's and why's, which is the part that made the dialogue for me come across cheesy and immature.

With that being what I did not like about the book, here is what I did like about the book. I loved the story line. It was fascinating to hear the history of the Lycanthropy line in the families, and how or why it was suppressed, as well as why the current line didn't know what they were. I dig the Alaskan family and their dogs. I also liked how you created potential conflict within the pack already by having two Alpha's, and mixing them up with humans as well. The family dynamic really worked for me, and is why I am looking forward to listening to the third book, because HELLO, Lumen!! OMG!! Plus I want to see if Allison's aunt and Jacob's uncle hook up, lol.

Have you listened to any of Joshua Story’s other performances before? How does this one compare?

I have only listened to Joshua from the first book of this series.

What character would you cut from Omega Rising?

Samantha's husband Ian, because he just puts a wrench in the whole story with being human and not being Samantha's true mate.

I really enjoyed the first installment of this series, which is why the sequel was disappointing and left me a little angry as well, because my standards were already set. I will continue with the third book because this could just be a fluke and return to its former glory in my eyes.

Jacob has found Allison, in the wilds of Alaska. she has been learning about her Omega status and what that means to her and those around her. Jacob turns up, and together they experience their growing attraction and what needs to be done to complete their bonding. but the new moon is coming, and there are more questions than answers as to how this will affect not only Jacob and Allison, but those (both human and animal) around them.

i enjoyed this one much more than the first. the time scale in this book is short, weeks only, compared to the months and months in the first, and it flows so much better (for me, anyway). i love the way that Allison greets her new status, and how she deals with it. Jacob is a proper Alpha male, but first and foremost he is human. he has to deal with not only his wolf's emotions, but his own. emotions from both humans are written well and you feel for them, you really do.

i will be looking for the next one, because i feel love in the air for several characters, both human and animal.

I also LISTENED to this in audio. I found that there was much I did not remember reading, and it made for like I was reading it as a new book! Thats not like me, I can usually rememebr much of a book, once I start reading it again, so it came as a great surprise to me, and it also put the book star rating up a notch!

Joshua Story continues to narrate this series, and he excels here. His *reading* voice is smooth, really smooth! He has new characters, new accents and I loved it! Jacob does tend to be more Scottish in his speech here, but that does get explained in the tale.

I have Lumen next to listen to, indeed, I started it already, and its gonna be another great instalment!