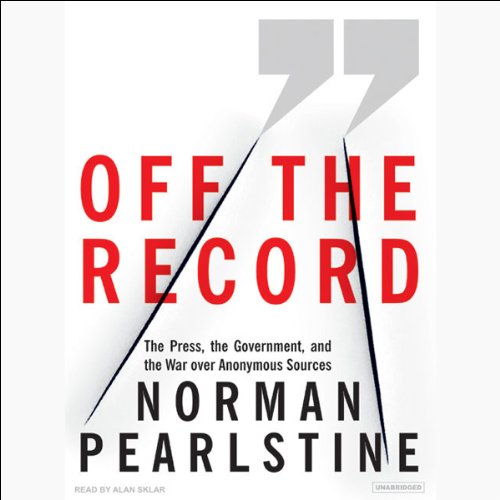 By: Norman Pearlstine
Narrated by: Alan Sklar
Try for $0.00

When Norman Pearlstine - as editor in chief of Time Inc. - agreed to give prosecutor Patrick Fitzgerald a reporter's notes of a conversation with a "confidential source", he was vilified for betraying the freedom of the press. But in this hard-hitting inside story, Pearlstine shows that "Plamegate" was not the clear case it seemed to be, and that confidentiality has become a weapon in the White House's war on the press - a war fought with the unwitting complicity of the press itself.

Watergate and the publication of the Pentagon Papers are the benchmark incidents of government malfeasance exposed by a fearless press. But as Pearlstine explains with great clarity and brio, the press' hunger for a new Watergate has made reporters vulnerable to officials who use confidentiality to get their message out, even if it means leaking state secrets and breaking the law. Prosecutors appointed to investigate the government have investigated the press instead; news organizations such as The New York Times have defended the principle of confidentiality at all costs - implicitly putting themselves above the law. Meanwhile, the use of unnamed sources has become common in everything from celebrity weeklies to the so-called papers of record.

What is to be done? Pearlstine calls on Congress to pass a federal shield law protecting journalists from the needless intrusions of government; at the same time, he calls on the press to name its sources whenever possible. Off the Record is a powerful argument, with the vividness and narrative drive of the best long-form journalism. It is sure to spark controversy among the people who run the government - and among the people who tell their stories.

"[A] lively and compelling account of 1st Amendment jurisprudence in the modern era . . . Off the Record is a terrifically candid and genuinely fascinating book by a shrewd and vastly experienced journalist." ( Los Angeles Times)

What listeners say about Off the Record

What are you talking about

The organization of this book was pretty poor. Instead of a more logical linear development of the theme it chooses to go back and forth between various legal precedents and cases. There is a fair bit of pontificating and self defense...but on the whole the book is fairly ineffective.
The primary purpose of this book is the Valerie Plame C.I.A. leak case...which is handled in on again off again side bars. The books format is confusing and if you are listening over an extended period of time you will have difficulty putting the jigsaw together.
Though the author did do a lot of work and research, the final product appears more as an ad hoc conversation that comes in and out of focus. If you have followed the leak case then there really isn't anything new here. If you didn't follow the case then this book will leave you a bit dumbfounded as to what exactly happened.