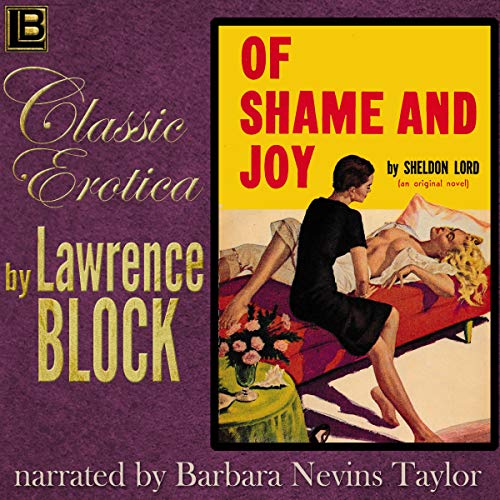 Of Shame and Joy (Collection of Classic Erotica) (Volume 11)

By: Lawrence Block
Narrated by: Barbara Nevins Taylor
Try for $0.00

O Rose thou art sick. /The invisible worm, /That flies in the night /In the howling storm: /Has found out thy bed /Of crimson joy: /And his dark secret love / Does thy life destroy.

Those eight lines constitute the complete text of “The Sick Rose,” published by William Blake in Songs of Experience in 1794. I took to Blake early on, and thought Of Crimson Joy would make a dandy title. I accordingly fastened it on this novel when I sent the manuscript to Harry Shorten at Midwood. Someone there changed the title to Of Shame and Joy, and while I was a tad annoyed at the time, I have to say they made the right call. Of Shame and Joy's not only a better title, it’s a damn good one.

I remember where and when I wrote the book, although I can’t say I recall much of the writing, or indeed of the book itself. It would have been in the late summer or fall of 1959. I’d gone to New York in July, settling in at the Hotel Rio on West 47th Street, planning to stay there until it was time to return to Antioch College for my final year. What I soon learned was that I’d already had my final year at Antioch, at least as far as the school was concerned. I’d written Campus Tramp, my first book as Andrew Shaw just before they informed me of this decision, and then I went to work on something else, and a bad morning led me to pack a bag and move back to my parents’ home at 422 Starin Avenue in Buffalo.

And, back in Buffalo, I set up my typewriter on the little maple desk on which I’d written Strange Are the Ways of Love and Carla, and resumed writing books for Harry Shorten at Midwood, - and for Bill Hamling at Nightstand, who’d liked Campus Tramp enough to want more. For the next eight months or so I wrote books on that desk. My routine was an interesting one; I’d join my mother at the kitchen table for a cup of coffee around midnight, then write all night, then have breakfast with my dad around seven - and then go to bed. It worked for me, and I found things to do with the rest of my time; notably, I bought a partnership in a coffeehouse, The Jazz Center, and began keeping company with the woman whose ill fortune it would be to become my first wife.

And how did Of Shame and Joy fit into all this? Well, the Provincetown setting came from a two-day trip while I was living at the Rio. This girl whom I knew vaguely was going there, and I decided to join her. I remember we took a Greyhound bus, and that her name either was or wasn’t Suzy. (But then that’s true of almost everyone, isn’t it?)

Of Shame and Joy has never been republished since its appearance as a Midwood Book, and I’m glad to be able to bring it out again - not least of all for the opportunity to use the wonderful Paul Rader cover. Isn’t it gorgeous?

It Was A Decent Story...

I could definitely tell this was written long ago...I thought it would have been much more raunchy as it's labeled erotica but this was no more than a coming of age story... not erotica. I felt sorry for both main characters actually but it seemed to work out in the end. The narrator did an excellent job!!!

I liked it! The narration was great and kept you entertained. The author did a good job with the characters. This was my first book by this author and I would definitely read other books by him. I was given this free review copy audiobook at my request and have voluntarily left this review.

I was gifted a copy of this audio book at my request for free & in return I offer my unbiased & honest review . I found the "erotica" in this book to be very mild , maybe when it was first written it was risqué , but by todays standards its very mild . The only reason I listened till the end of the book was because of the great narration . Barbara Nevins Taylor is a very good narrator , she keeps the story flowing . A narrator with less ability would have had me reaching for the off button . Barbara Nevins Taylor , 5/5 . Lawrence Block , 3/5 , just .

Block’s Collection of Classic Erotica has been a wholly enjoyable collection, which initially surprised me given how little interest I had in erotica before diving in. They are fully formed stories with solid plots and characters and about as much sex as you could get away with in the 50s and 60s (suffice it to say they are tame) that venture into the realms of crime fiction, coming of age, and more. Of Shame and Joy is certainly not the strongest in the collection, telling the story of a woman who needs sex but is never satisfied and a lesbian who loves her and recognizes her ignorance in regards to her own sexuality. The writing is good and Taylor’s narration is strong, but the story itself is weaker than Block’s usual output. This, of course, does not take away from the fact that Of Shame and Joy is enjoyable and worth a listen.

“ I voluntarily provided this free review copy audiobook by the author, narrator, or publisher.” I enjoyed the book, a little slow and anti-climactic

Another Audible commuting listen courtesy of a free download code off the back of a response to a Lawrence Block newsletter. Not one I regretted listening to, but not one which has me hoovering up all Lawrence Block's early erotica works, pushed out under pseudonyms about 50-60 years ago.

A Princetown love story of sorts via....... denial of true self, an addiction to sex with a history of nymphomania, casual sexual encounters, nude swims, sex on the beach, parties and flings, unrequited love, obsession and a marriage proposal, a suicide attempt, a change of mind, a rescue, a rape, an encounter with a passive partner, a heart to heart and an acceptance of identity, an exciting encounter or two and a happy ever after (possibly).

A fairly small cast of characters who we get to know during the summer at a resort town. Boys and girls, though in the end the main focus is on a couple of women. I can't claim to have been on the edge of my seat regarding the outcome for our couple, though I'll profess an interest in seeing how it all turned out.

I think this one shows it's age a bit as the sex is incredibly tame by today's standards. Not especially memorable really. One traumatic event and the ability of the victim to move on incredibly quickly and put it behind her, struck me as unlikely and unbelievable and kind of left a bit of a sour taste in the mouth, if I'm honest. Apart from that bump in the road, I was happy to learn our characters' back stories, ambitions, hopes, failures and adventures.

I did enjoy the narration by Barbara Nevins Taylor.