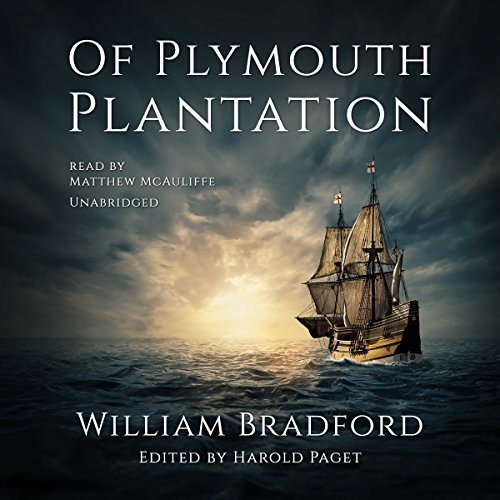 By: William Bradford,Harold Paget
Narrated by: Matthew McAuliffe
Try for $0.00

The most important and influential source of information about the Pilgrims and Plymouth Colony, this landmark account was written between 1630 and 1647. It vividly documents the Pilgrims' adventures: their first stop in Holland, the harrowing transatlantic crossing aboard the Mayflower, the first harsh winter in the new colony, and the help from friendly Native Americans that saved their lives.

No one was better equipped to report on the affairs of the Plymouth community than William Bradford. Revered for his patience, wisdom, and courage, Bradford was elected to the office of governor in 1621, and he continued to serve in that position for more than three decades. His memoirs of the colony remained virtually unknown until the 19th century. Lost during the American Revolution, they were discovered years later in London and published after a protracted legal battle.

The current edition rendered into modern English and with an introduction by Harold Paget, remains among the most enjoyable books from 17th-century America.

What listeners say about Of Plymouth Plantation

We’ve all grown up with what seem like mythological tales of the Pilgrims and the Mayflower. Turns out that many of them are historical facts. Even more, conditions those first years in New England were worse than can be imagined—over half died that first winter from disease.

And being a religious community did not make them immune from devilish actions. Their backers in England charged them usurious rates and their own representatives were unreliable and venal. It’s a wonder this colony survived at all.

Harold Paget rewrites William Bradford's journal about life in early Plymouth. He does a great job of updating the language from the KIng's English spoken at the time to today's modern English. This allows the story to be told without needing to worry about the differences in the way the English Language was spoken three centuries ago.

A Must read or listen!

Written and narrated by those that where there! A must listen or read of every American! Including Native Americans!😁

I was happy to learn more about the New Plymouth colony. It was difficult in an audio book to keep track of the many characters and details. Nonetheless there was so much more to the colony than fifth grade history teaches us.

It’s obviously the historic document, and it goes into fantastic detail about the pre colony persecutions and the fortunes and mis fortunes they endured. As it gets to a comfortable period in history it turns into an accountants log of year-by-year accounts. Worth the read

Since the narration frequently reads like a ships manifest. Although the tale is important I had hoped for something more personal and arresting...along the lines of The Diary of Samuel Peeps. Instead, it is somewhat ponderous and, frankly, dull. Hats off to the Brave Pilgrims but the rub is in the (incessant) details.

I listened to this account as part of my Thanksgiving this year. The introduction tying the Pilgrims to the Protestant Reformation and its game changing current of personal freedom, religious freedom, economic growth, political freedom, etc. was excellent. The Pilgrims suffered famine,hostile Native Americans, financial reversals, and traitors in their own ranks, but they never lost their dedication to building a new home or to their faith in God. Harold Paget did a wonderful job of updating the language while keeping the feel of the original.

If you love historic tales, then you will probably like this book. I enjoyed this book.

I bought it for history, ended up with religion. Tried to listen, but no thanks.