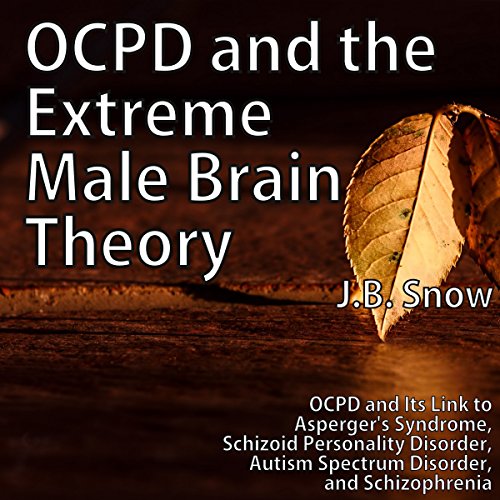 This audiobook seeks to explain the potential links between OCPD and Autism spectrum disorder, Asperger's syndrome, and schizophrenia. It touches base on Cohen's extreme male brain theory and what it means for people with OCPD. It correlates the traits of the former disorder with that of the latter disorders.

People with OCPD often struggle in a marriage. There are many reasons why this is true. Their critical nature often tends to wear on their partners. They become obsessive and compulsive about the neatness of the home, often complaining to their spouse and children if things are out of place. They are overly self-conscientious when they go out in public. They are often on autopilot, so they are generally forgetful. Others become deeply annoyed with OCPD people who rarely seem to pay attention or listen to them.

People with OCPD often have meltdowns if the rules or routine is changed. If the family intends to go to a movie and someone suggests stopping for dinner at the last minute, this can send them into a fit of rage. Many OCPD people are task-oriented and object-oriented. They must have symmetry in a room, or the visual presentation of the room will throw their mind into disarray. They feel like their brains are somewhat disorganized, and they may compensate for it by obsessively organizing everything else in their environment.

It is said that nearly 80 percent of people with ADHD and autism spectrum disorder experience a failed marriage, if they ever marry at all. Many people with Asperger's syndrome are averse to marriage and relationships.

What listeners say about OCPD and the Extreme Male Brain Theory

This book doesn't get you there

This book has some good information but no specifics. It doesn't help you to understand the condition. I did not find it directional. It appears vague and includes several different conditions as co-morbid with this condition.

That's IT? was my reaction

Decent but clipped. Annotation needs to be revised

Was OCPD and the Extreme Male Brain Theory worth the listening time?

No, not for me. The good thing is that it is very short so no large amount of time lost.

I tend to study psychology so my view may be a bit different since I see it from a unique perspective. Those who do not may have a different experience.