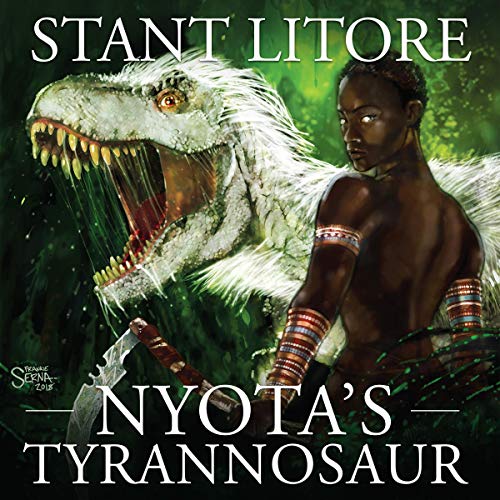 By: Stant Litore
Narrated by: LailaP
Try for $0.00

Meet Nyota Madaki. And her tyrannosaur. Fighting for survival in the far future.

When Nyota wakes in the middle of a forest inside an artificial world, she knows she's in trouble. Her trainer and sister athletes are nowhere to be seen, the airlock to the shuttle bay doesn't respond to her commands, and the night forest is loud with the screeches of atrociraptors and ravenous tyrannosaurs.

Stranded inside the world where massive dinosaurs are grown for the arenas, she will face many perils - the hunger of nocturnal predators, the crash of starvation, and the devouring rot of a bioweapon unleashed inside the tyrannosaur world while war in space rages just outside.

But Nyota is ready. Inhabited by entire ecosystems of nanites, trained for strength and speed and elegance, capable of feats that would leave others broken on the forest floor, Nyota can handle anything. Anything, that is, except the sudden rush of forgotten memories into her heart. Anything but the realization of who she really is.

Luckily she won't have to face that alone. Not with this tyrannosaur egg hatching beside her....

What listeners say about Nyota's Tyrannosaur