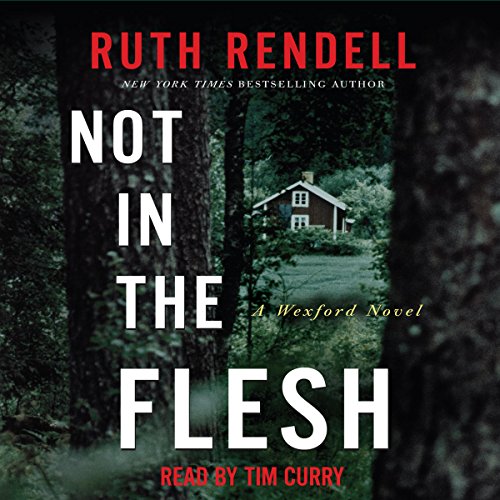 Not in the Flesh

A new Chief Inspector Wexford mystery from the author who Time magazine has called "the best mystery writer in the English-speaking world".

When the truffle-hunting dog starts to dig furiously, his master's first reaction is delight at the size of the clump the dog has unearthed: at the going rate, this one truffle might be worth several hundred pounds. Then the dirt falls away to reveal not a precious mushroom but the bones and tendons of what is clearly a human hand.

In Not in the Flesh, Chief Inspector Wexford tries to piece together events that took place eleven years earlier, a time when someone was secretly interred in a secluded patch of English countryside. Now Wexford and his team will need to interrogate everyone who lives nearby to see if they can turn up a match for the dead man among the 85 people in this part of England who have disappeared over the past decade. Then, when a second body is discovered nearby, Wexford experiences a feeling that's become a rarity for the veteran policeman: surprise.

As Wexford painstakingly moves to resolve these multiple mysteries, long-buried secrets are brought to daylight, and Ruth Rendell once again proves why she has been hailed as our greatest living mystery writer.

What listeners say about Not in the Flesh

Would you consider the audio edition of Not in the Flesh to be better than the print version?

He is so adept at giving each character their own voice. I also like that he is able to pull off female character voices as well as mens' voices. I feel as though I can almost see his facial expressions as he is reading--it's like theatre of the mind. I go out of my way to find books read by Curry as I enjoy him so much. This series was new to me, and I will definetly be checking out additional titles in the weries if read by Curry.

Mystery stories almost always have places where credibility stretches too thin, but this story remains solid the whole way through. Believable twists and turns, and as always a thoroughly enjoyable performance by Tim Curry, whose voice I have grown to absolutely adore. I listened to this tale mostly because he tells it, and am unexpectedly rewarded with a very good mystery to boot.

Narration was perfect. Loved every minute. Story kept you captivated. This was definitely my favorite one so far.

Tim Curry's voice is a delight

I picked this book after listening to the sample based solely on what a pleasure it is to listen to Mr. Curry read. The book itself is interesting enough, but I'm not sure I would have had the patience to stick with it without him bringing it to life.

A Ruth Rendell mystery is always a fun and twisty ride. Tim Curry is absolutely fantastic as the narrator. Mr Curry uses multiple voices so smoothly you would think there were a group of actors reading instead of just him. There is a side element to the mystery story regarding a social issue that may be jarring for some listeners. Still worth the ride just to hear Tim Curry.

The narration by Tim Curry is a total joy. Of course the story is excellent, as well. The quality of the series has been maintained throughout.