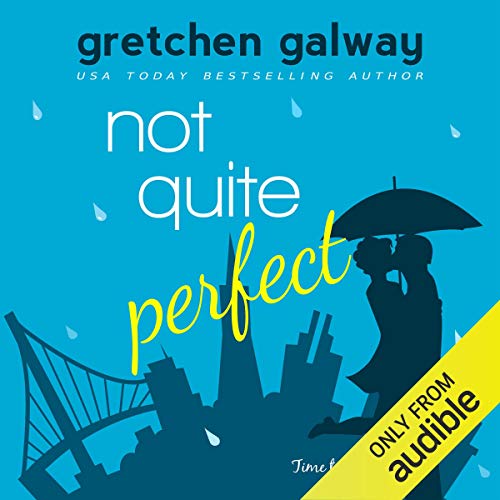 By: Gretchen Galway
Narrated by: Tanya Eby
Try for $0.00

Serial temp worker April Johnson is nothing like her wildly successful brothers. She doesn't have an Olympic gold medal. She doesn't have millions in the bank from a tech company she founded as a teenager. She doesn't even have a place to live, not since her boyfriend snuck off in the middle of the night - skipping out on the rent, his three-legged dog, and her. Now forced to move back home with her mother and grovel for a job from one of her brothers, April decides it's past time she got serious about her life.

Zack Fain, on the other hand, has been too serious for years. After losing his wife to cancer at the age of 26, he's done nothing but work on his consulting business. But when he meets April at a new job, he forgets he's a humorless suit who never gets emotionally involved. She makes him laugh, she turns him on, and he begins to wonder if it's time he broke a few rules.

Although April refuses to get stuck in yet another dead-end relationship, Zack isn't like any of the guys she's dated before. This could be the real deal. This could be serious.

But is either one of them ready for the kind of serious that lasts a lifetime?

What listeners say about Not Quite Perfect

The story was sweet and sassy. Just like the heroine. Loved them both and the series is great. Loved April in all her punky glory paired with a nerdy guy who hides his sexy self beneath his glasses! The narrator KILLED! It was awesome. I would love it even more if it had been done in duet narration to hear his nerdy voice but a girl can dream!

Listened to all three stories in the Audible format. It only took me a week to finish all three because the stories were so engaging I wanted to know what happened next. Tanya Eby does an excellent job of bringing even the minor characters to life and giving each one a distinct voice.

Love this Series and Writer!!!!

I loved everything about this book from start to finish. If you like romantic comedy start with book one and proceed through the series. Have already downloaded book four and cant wait to listen to it. Also enjoyed the voice of the book. She did a fantastic job of relaying the story and depth of the characters. 👌👌👌👌👌

I really enjoyed it!!!

Would you consider the audio edition of Not Quite Perfect to be better than the print version?

Not necessarily. I enjoyed reading the audio edition because it allows me to do many things (exercise, cook, housework) while I am enjoying the book I want.

April Johnson, She is young, fresh, crazy and totally lovable

Have you listened to any of Tanya Eby’s other performances before? How does this one compare?

It was the first book I listened to by Tanya Eby

It made me laugh. I really enjoyed it!

I truly enjoy all of Gretchen Galway's books. They are funny, pleasant, with wonderful characters and loads of romance. This book is no exception. This novel is a stand alone and there are no cliffhangers which is the way I like it. I must admit that enjoyed the glimpses in the lives of April's big brothers: Liam and Mark. They are the protagonists of two previous books. It is not necessary to read them in order to get to this book but they are so worth reading nonetheless. Not quite right was really funny and it had some interesting twists. Even though April faces various difficulties she doesn't cower and she fights right back when necessary. She is little crazy and a lot lovable. I also enjoyed Zack who is a kind, serious and yet sexy character. Loved their match!

I always enjoy books by Gretchen Galway, and this one was no exception. The characters are funny and likable, the dialog is entertaining, and the plots are true-to-life. The narrator Tanya Eby did a fine job of differentiating between the characters. If you like a balance of fun and serious in your novels, you'll enjoy this one. I know I did!

Gretchen Galway does it again!

This book was really great. I loved April and her snark and her love of art and being such a free spirit on the outside. I also loved Zach and how grounded he seemed on the outside and of course a guy with glasses always has a special place in my heart. I really liked how they helped each other out of their comfort zones. This was a very nice love story with a few communication break downs but nothing that couldn't be resolved. Also the rest of the people around them really made this book wonderful. Highly recommend this series!

I was lucky enough to 'win' this book and so here is my review.
This is book 3 in a series. The good news is it's a 'stand alone' that works very well. Ms. Galway has written a humorous contemporary romance....one of my favorite genres. This book is a light hearted romp with real life issues for the lead characters.
In addition to the good story Ms. Eby did a good job as a narrator. I have hearing problems and I could hear and understand her easily. She refrained from the annoying and problematic soft then loud then soft then loud......that keeps me from listening to so many books.
If you enjoy humorous contemporary romance this is for you......I now plan to get the other books in the series.

The third installment of the romantic Oakland Hills series is the first I've listened to instead of read. These books have interesting characters, quirky story lines, humor, and romance (but nothing R-rated). Each book and story stands alone, but the same characters appear in the different books so you see how their lives change.

This installment reveals April's story. The only girl in the family, she's decided to stop being a wild child and get her act together. She's sworn off bad boys and is ready to figure out what to do with her life -- but it's harder to achieve than she thought it would be. And brothers are not the help you hoped would be there for you. At 27, she's decided to become a responsible adult, even if it means wearing tan khakis and giving up her boots.

It's a fun book in a fun series but I liked the first two books more. I think it's because the narration irritated me. The reader didn't talk in a monotone, and used good inflection so maybe it is just me, but it seemed unfailingly light and bubbly. The narrator didn't display the male voices with much emotion or differentiation of sound.

Enjoyed it as a distraction from insomnia. Probably would listen to it again if there was nothing more exciting