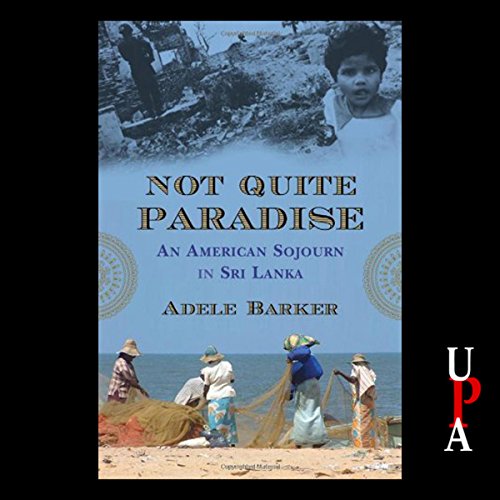 A chronicle of life on the resplendent island. Adele Barker and her son, Noah, settled into the central highlands of Sri Lanka for an 18-month sojourn, immersing themselves in the customs, cultures, and landscapes of the island: its elephants, birds, and monkeys; its hot curries and sweet mangoes; the cacophony of its markets; the resonant evening chants from its temples. They hear stories of the island's colorful past and its 25-year civil war between the Sinhalese majority and the Tamil Tigers.

When, having returned home to Tucson, Barker awakes on December 26, 2004, to see televised images of the island's southern shore disappearing into the ocean, she decides she must go back. Traveling from the southernmost coasts to the farthest outposts of the Tamil north, she witnesses the ravages of the tsunami that killed 48,000 Sri Lankans in the space of 20 minutes, and reports from the ground on the triumphs and failures of relief efforts. Combining the immediacy of memoir and the vividness of travelogue with the insight of the best reportage, Not Quite Paradise chronicles life in a place few have ever visited. The book is published by Beacon Press.

"Rich in the tales of Sri Lanka under colonial British rule as well as coverage of the current civil war, Barker's memoir is an enlightening and captivating read." ( Booklist)

What listeners say about Not Quite Paradise

This was a very heartfelt book that set out to divulge the different factions that have been warring for years on this fantastic island.It also delves into the aftermath of the tsunami that devastated the island.I find myself compelled to want to travel to this country,but think I would simply avoid the north and its myriad of problems.The preserve in the southwest where birds and numerous rare tree species really seemed like a fantastic place to go.

The author really does her best to try and penetrate the complexities of Asian society.I live in China and have studied the language in depth,but often still feel I am on the outside after nearly three years of living here.I felt like she was able to really know the people there better because they were fluent in English.

Adele Barker’s book painted a broad picture of the history, culture, politics and civil war of this
almost paradise that I feel I have almost visited
thanks to her excellent writing and reading. What a reporter.

Wonderful history lesson plus fish out of water story

A sincere and in-depth account of Sri Lanka’s civil war and effects of the 2004 tsunami as learned by the author from her personal relationships with Lankans during her year as a professor plus subsequent return after 2004! Author reads the book herself—entirely heartfelt, she was so engaged in the culture...
highly recommend!

It's not often that you come across an author in Audible who reads their entire work with such spirit, courage and conviction. I was lucky enough to have been born there so can appreciate different people's points of view.

In this recording, Adele Barker presents a vivid journal of her time in a beautiful island at a time of relative demographic tensions. The running theme of this recording is not so much on political events that plagued the island for so many years but the humanity and interactions of those that lived there - particularly in the wake of the devastating Tsunami of 26th December 2004. The descriptions of how people lost their lives in the Tsunami are particularly harrowing to listen to.

Whilst I would have preferred a lot more emphasis on the gentle religious and traditional aspects of the island as well as its humble islanders - particularly now that the civil war has thankfully ended - her account is honest and vivid and deserves every one of the five stars awarded.

I also think the title for this book could have been better thought out and doesn't reflect the content. Maybe "Serendipity: An American Sojourn in Sri Lanka" would have been more appropriate? This is a travelogue with a difference, describing how people living in an island of paradise cope with both natural and man-made adversity.

Finally, having listened to the whole of the recording, I am left with one thought. Sri Lanka is such a beautiful 'paradise'-like island. I wonder if Adele would be willing to travel back and write a follow up to this book with a different emphasis, this time on the historical and cultural aspects of the Island and it's influence on the people of Sri Lanka? Food for thought.

Going to Sri Lanka???? This is a MUST LISTEN!

A wonderful book, full of interesting facts about the history and the culture of Sri Lanka. So much better, than any dry old travel guide.

The narration is mesmerising.

Wow what a great book. The author Adele Barker narrates this book. You get to understand how Sri Lanka ticks, then and present day along with how it is moving forward.

I listened to it as a passenger in a car, visiting some of the sites that Adele mentions and asking for more In depth with our driver.

I would say it is a must to listen to whilst out in Sri Lanka, or if you are planning a visit.

The title is interesting and made me want to download it. Thank you Adele

I have sent a copy of it to a friend to listen to.

I listened to this book before visiting Sri Lanka. I did not get the chance to visit all the places mentioned in the book but the book gave me insight into this amazing country, it's history, wildlife, people and the difficulties the country has faced. It describes the effects on the people of the tsunami, the war and leadership. I am grateful to the author for sharing her experiences and impressions with us, and could only wish for a sequel to update us on the thoughts and hopes of the people seven years on.... Perhaps that is something that we should discover for ourselves.... I strongly recommend this book for anyone planning to visit Sri Lanka, or for anyone who has an interest in these wonderful people and their harrowing recent past. Isthooti Adele!

I downloaded this as I'm visiting Sri Lanka in March and wanted some insight to the history of the island. I didn't expect such a charming and insightful tale! I absolutely loved it, what a great way to learn about the place I will be privileged enough to visit. Thank you, Adele.

A fascinating sociological work of art

I came into this book knowing nothing of Sri Lanka but now thoroughly educated from a foreigners point of view of the troubles that have plagued not just Sri Lanka but many lands throughout the world, think of the former Yugoslavian states to Palestine and the North of Ireland. We follow Adele through her own eyes as she learns about the culture and problems of the diverse people on the island of Sri Lanka. How the Tamils came to call the North of Sri Lanka home and their struggle for acceptance and equality within their adopted country. Through calming and relaxing prose we almost learn by osmosis of the struggle and sometimes ineptitude of both the Sri Lankan government, the global aid scheme and the role of the media of painting a picture to support the government's narrative. We are repeatedly told that the world failed in their response to the Tsunami of 2004 and the struggle and strength of the people to help each other when aid was scarce. What the people went through in 2004 and beyond, I struggle to come to terms with throughout this book. Hopefully one day they will find peace. Thank you for writing this book Adele I feel more informed and entertained for your book. Thoroughly recommend this book.

A lovely read whilst in Sri Lanka

This was great to have during my trip to Sri Lanka and I really enjoyed listening Adele’s journey and experience there. It was also really helpful for learning more about the history and culture. A must read if you are heading there.

Great background for a visit

I listened to this book last year, when I started planning my recent tour of Sri Lanka, and listened again whilst I was there. It was good to have some background for my trip, and Adele Barker really captures the vibrant character of the country. I wanted to understand the political turmoil which I only knew from press reports, and her personal anecdotes and stories from real people helped to bring to life the struggle in a fair and balanced way - something you won't necessarily get when you visit. I liked how she represented the local accents - it was a good way of showing when she was quoting without the irritating "he said, she said" etc.
This book really enriched my visit - I would thoroughly recommend it.