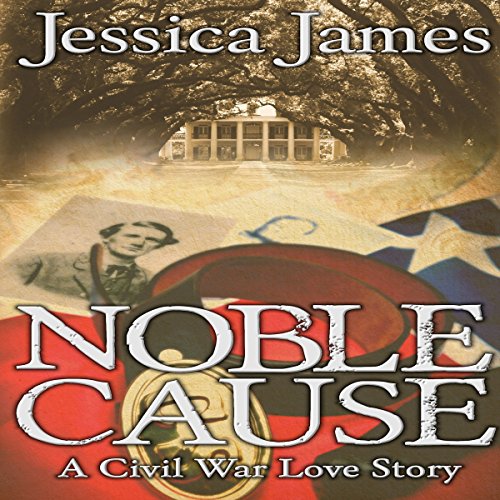 By: Jessica James
Narrated by: Caroline Miller
Try for $0.00

Honor and conviction clash with loyalty and love in this epic Civil War novel that pits brother against brother. Winner of the coveted John Esten Cooke Award for Southern Fiction, Noble Cause chronicles the clash of a Confederate cavalry officer with a Union spy as they defend their beliefs, their country, and their honor. This book was originally published as Shades of Gray, and now has a new happily-ever-after ending. Called: A riveting piece of historical fiction, by the Midwest Book Review and often compared to Gone with the Wind, Noble Cause takes readers across the rolling hills of Virginia in a page-turning tale of courage and love. Gallantry and chivalry are put to the test when Colonel Alexander Hunter discovers the woman he promised his dying brother he would protect is the Union spy he has vowed to his men he would destroy. With its unique blend of romantic and historical fiction, Noble Cause tells a deeply personal and poignant tale that, according to one reviewer "transcends the pages to settle in the very marrow of the reader's bones." Praised by both men and women, and suitable for teens, this novel captivates and enthralls by telling a classic tale of courage, sacrifice and enduring love. Originally published as Shades of Gray, Noble Cause is the winner of multiple national literary awards.

What listeners say about Noble Cause

I’ve been with audible for years and this is my first review. As a Christian this book is such a beautiful and wholesome story despite the setting of war. I do feel that this book would be much better read by a man…despite my feeling that most books are better read by women. This book was hard to get through in the tone of a female voice. I was tempted to stop listening a few chapters in but I’m glad I didn’t!

The text drones on and on with unnecessary details as though a page or chapter requirement needed to be met. The narrator's interpretation of the characters' voices did not match mine and I lost respect for several of the main characters simply because they spoke awkwardly or their tone did not match the sentiments they were speaking. Audible makes it hard to skip over superfluous text or to move ahead in the same way page-turning would suffice for a book such as this. This author reminds me of Diana G. author of Outlander...in which she spends WAAAAAAAAAAAAAAAAY too much time on narration and details that really don't matter...unless a page count is required to be met. Henry David Thoreau said it best with "Simplify."

I really wanted to like this book when I began it, however the story was so amazingly slow and the narrator very boring, and monotone that I had to return it. I tried to fast forward through chapter 10, but the story hadn't moved at all.

One of the best books I've read in a very long time! Definitely a must read

Loved the print book too.

If you could sum up Noble Cause in three words, what would they be?

What other book might you compare Noble Cause to and why?

Gone with the Wind because it's an in depth, character-driven, Old South storyline.

Have you listened to any of Caroline Miller’s other performances before? How does this one compare?

If you could rename Noble Cause, what would you call it?