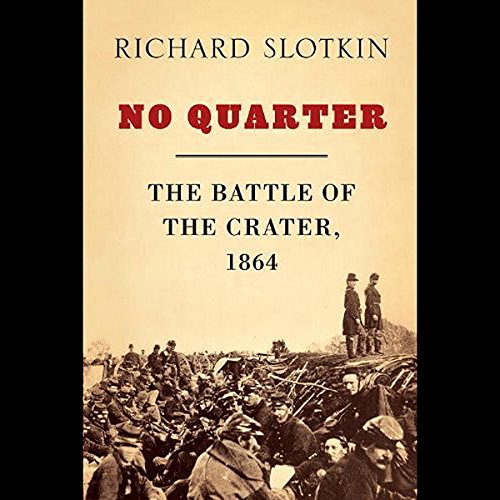 In this richly researched and dramatic work of military history, eminent historian Richard Slotkin recounts one of the Civil War's most pivotal events: the Battle of the Crater on July 30, 1864.

At first glance, the Union's plan seemed brilliant: A regiment of miners would burrow beneath a Confederate fort, pack the tunnel with explosives, and blow a hole in the enemy lines. Then a specially trained division of African American infantry would spearhead a powerful assault to exploit the breach created by the explosion. Thus, in one decisive action, the Union would marshal its mastery of technology and resources, as well as demonstrate the superior morale generated by the Army of the Potomac's embrace of emancipation.

At stake was the chance to drive General Robert E. Lee's Army of North Virginia away from the defense of the Confederate capital of Richmond - and end the war.The result was something far different.

The attack was hamstrung by incompetent leadership and political infighting in the Union command. The massive explosion ripped open an immense crater, which became a death trap for troops that tried to pass through it. Thousands of soldiers on both sides lost their lives in savage trench warfare that prefigured the brutal combat of World War I. But the fighting here was intensified by racial hatred, with cries on both sides of "No quarter!"

In a final horror, the battle ended with the massacre of wounded or surrendering black troops by the Rebels - and by some of their white comrades in arms. The great attack ended in bloody failure, and the war would be prolonged for another year.

With gripping and unforgettable depictions of battle and detailed character portraits of soldiers and statesmen, No Quarter compellingly re-creates in human scale an event epic in scope and mind-boggling in its cost of life.

A well written very informative book on a major period in the late war of Northern Aggression. A lot of research went into the work and for an battle account it doesnot get much better.

Good writting and a good book.

Excellent book, Richard Slotkin does great research and tells the story well. One other reviewer points out some inaccuracies of the facts and I know the reviewer is correct in some of those those cases and probably correct in all of them but none is really material to the history and story told. It is a story that is well know buyt Slotkin tells it in more detail than any other historian that i know of.
Narrator Dion Graham also does a fine job. The "N Word" flies around as much as the bullets. Some may find this offensive but frankly the story is meaningless if we cannot face the language and attitudes of both Confederate and Union soldiers. In fact, that is really what the book is about rather than the military significance of the battle.
There is one issue with this audiobook but it is a major one. The recorder jumps around from chapter to chapter. You listen to a chapter describing the charge and then the next chapter they are planning the charge. Finally, the recording ends with 35 pages left in my hard copy version of the book. None of this is the fault of author Richard Slotkin or narrator Dion Graham. This is a product of Audible Studios.. I have listened to many of there books and they have all been excellent but they dropped the ball on this one, You are better off reading a hard copy version.

I really wondered when this was ever going to start. The answer is about two thirds of the way through. Endless horribly padded chapters about the two armies, their strategies, the build up to the battle, the commanders, and Lord knows what else before you finally get to the battle. Of course we need some context, but frankly you could lose most of the first half of the book and be no less informed.