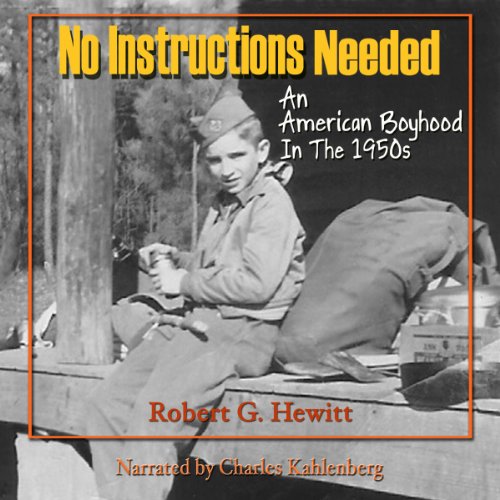 By: Robert G. Hewitt
Narrated by: Charles Kahlenberg
Try for $0.00

An affectionate memoir by artist Robert Hewitt about what it was like to be a boy in America in the 1950s, in a world where even indulged only children were expected to amuse themselves with little assistance from adults, where a boy and his best friend - another science nut - went alley-scavenging for project parts, where the family sunroom was filled with model trains, the refrigerator with chocolate milk, and a fellow's suitcase with firecrackers. It was a time of boredom in school, growing fascination with girls, and encounters of the scary kind with over-protective fathers. There was the first car that mysteriously knew to the penny how much money a boy had made that weekend bagging groceries - and shaped its repair needs accordingly. There was the brand new second car that demanded dangerous accessories. And there was the girl, the special girl, who almost stripped its gears, yet still remained an object of desire. There was all the fun of growing up in a more-innocent time in a pleasant neighborhood where everyone knew everyone else - and what they'd been up to - and were quick to tell a fellow's parents all that they knew. And there was the family, long-suffering but loving, which provided the supportive environment in a past that was really another country, where boys did do things differently. It was a lot of fun.

What listeners say about No Instructions Needed

Even thought I am female, but of the same era, I could identify with the entire story. Loved Charles Kahlenberg. Great story teller.