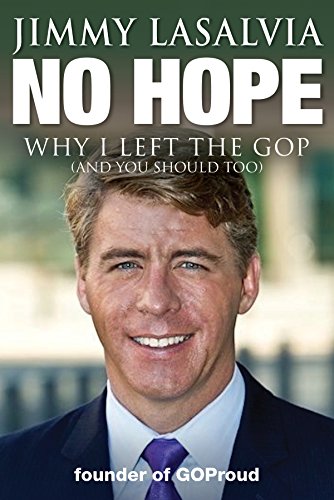 By: Jimmy LaSalvia
Narrated by: Mark Schectman
Try for $0.00

No Hope is for disaffected conservatives and moderates as well as liberals who are fed up with the political party system. Forty-three percent of Americans now identify as Independents. Many of them are right of center and used to be Republicans.

In No Hope, former Republican Jimmy LaSalvia, cofounder of GOProud, which was one of the highest-profile gay political organizations, will share what he did to ignite change in the Republican Party. But ultimately LaSalvia determined there was no hope that conservatives would evolve on important cultural issues - revealing the party as an untenable coalition that includes the tolerance of bigotry.

No Hope chronicles Jimmy's evolution from team-player Republican to free-thinking Independent and includes entertaining stories and anecdotes about some of the biggest names in politics today, including Donald Trump, Ann Coulter, Roger Ailes, Reince Priebus, Rand Paul, Carly Fiorina, Michele Bachmann, Rick Perry, Rick Santorum, and others. No Hope also exposes some of the ugliest antigay operators in Washington, DC.

In early 2014, Jimmy announced his resignation from the Republican Party and changed his voter registration to join the new majority of Independent voters, receiving significant media attention. Now, in No Hope, he tells all and, in the most entertaining outing in political book history, breaks apart the current two-party system to energize democracy.

What listeners say about No Hope

Most books with a political title are dry and one sided. Not this one. The author gives a wide vantage point on a complicated topic. Jimmy Lasalvia is candid, authentic and entertaining in his recounting and understanding of our changing (sometimes not fast enough) government and American culture. This book gave me some new insights and a lot to think about.