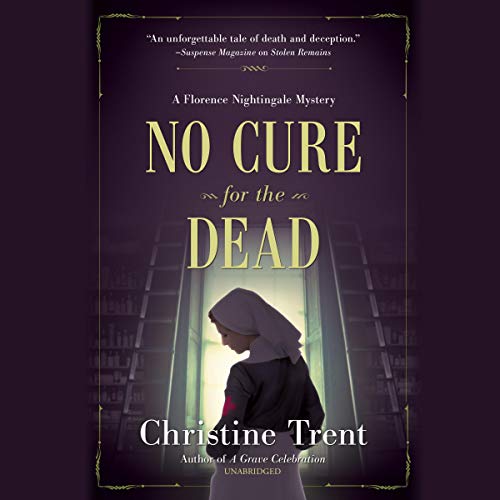 No Cure for the Dead

By: Christine Trent
Narrated by: Lucy Rayner
Try for $0.00

When a young nurse dies on her watch, Florence Nightingale must uncover the deep-hidden secrets someone will kill to keep buried.

It is 1853. Lady of the Lamp Florence Nightingale has just accepted the position of superintendent of the Establishment for Gentlewomen during Temporary Illness in London. She has hardly had time to learn the names of the nurses in her charge when she suddenly finds one of them hanging in the establishment's library. Her name was Nurse Bellamy.

Florence's mettle is tested by the dual goals of preserving what little reputation her hospital has and bringing Nurse Bellamy's killer to justice. Her efforts are met with upturned noses and wayward glances, except for her close friend and advocate inside the House of Commons, Sidney Herbert. As Florence digs deeper, however, her attention turns to one of the hospital investors and suddenly, Sidney becomes reluctant to help.

With no one but herself to count on, Florence must now puzzle out what the death of an unknown, nondescript young nurse has to do with conspiracies lurking about at the highest levels of government - before she is silenced too.

What listeners say about No Cure for the Dead

Loved the whole experience, including the narrator. The story was well written, well planned and an excellent topic. Florence Nightingale was a tremendous heroine of our not so distant past. She deserves a lot more attention. Even a little fictional assistance.

This book is extremely well researched. It's well plotted and well written. The mystery is suitably mysterious, and I didn't guess whodunnit until the reveal....

It seemed to take forever to get there. Every minute detail of how nursing homes/hospitals were run in Florence Nightingale's time was mentioned. It almost made hearing her agonize over the minute details about her personal life refreshing.

I don't know if it was the reader's delivery or the novel itself, but, really, couldn't SOMETHING have been cut or saved for the next book to make things move a little faster?

As I said, the writer is good, but this book was just not my cup of tea. As long as you don't mind the extraneous facts strewn around causing somewhat glacial pacing, you might like the mystery, but I was thinking that watching paint dry might have been more diverting.

reminded me of Scooby-Doo

The action seemed a bit forced. There was one bizarre occurrence after another. Glad to see Florence set out as a real person and a good role model. brought out many of the problems women faced in the 19th century. The unfolding seemed contrived. Still a pleasant listen.

not sure if the narrator or author is more to blame but the characterization of Florence Nightingale was really hard to stomach. I struggled to finish but I am not a quitter. I chose this book because of my interest in the real woman and nursing revolutionary. The author did include historical aspects of her life. But honestly I appreciate that the author's note at the end more than any part of the narrative. The ending was spectacularly bad. wish I had quit. I love historical fiction but this is one is to be avoided.

The reader hurt my ears, the story is still good!

The inflections and wisps in the voice of the reader made it hard to listen via Bluetooth. I have to say it killed my overall enjoyment.

Entertaining way to learn about a woman who really was an amazing figure in history.

Great story, maybe an editor could trim it?

The story is good. But it could use a good editor to help it move along a bit more quickly. The slow narration didn't help, either. Pushing the speed up to 1.1 or 1.2 helped as well.

I read some of the earlier reviews regarding the reader and not liking her performance. I found the book easy to listen to and was not distracted by the reader or her technique. I did listen at 1.3x speed.

It may have been a good story but I found the narrator's voice condescending and irritating . It prevented me from finishing it.

As the story continued, it drew me in. I had no idea who done it.
surprise,surprise.

The reading is monotonous and grates

I had to stop listening to this story because after a while it really started to annoy me. Not actually the story itself but the narrator. Certainly as far as the stories concerned not much happens for a big part of it, although I found the day to day routine of the hospital as referenced in the book quite interesting. The narrator is just gratingly precise and fake. one of the big problems I have is that she tries to sound posh British and then she comes out with a word like 'math', not 'maths' but 'math'.
Admittedly some of the problems with the actual narration do come down to the actual wording on the part of the author. Occasionally the speech is just a bit too casual and modern. When you combine that with the very precise (almost gratingly so) speech of the narrator, it comes off as a bit weird.
It's rather like hearing Eliza Doolittle with her :small talk' combined with her adopted accent. It doesn't sound right it sounds fake because it is.