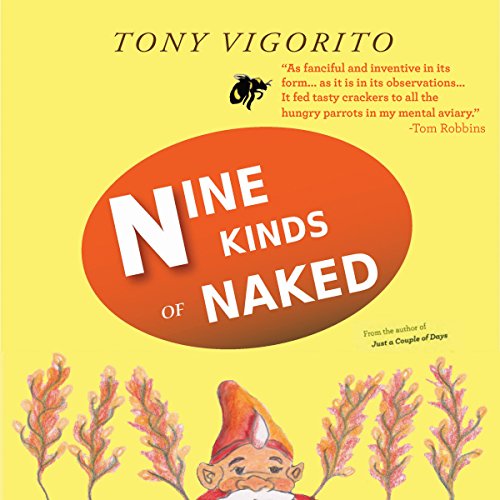 By: Tony Vigorito
Narrated by: Kristin Kalbli
Try for $0.00

Cult favorite Tony Vigorito invokes a kind of chaos theory in Nine Kinds of Naked that gleefully turns any expectation of time, space, or plot on its head.

"Chaos theory says that a tiny, almost imperceptible event can have large, even catastrophic coincidences: a butterfly flapping its wings in North America leads to a hurricane on another continent, for example. In this fictional take on chaos theory, several offbeat characters are linked by a single event that expands through time, sweeping them up in it and changing their lives. A traveler works a nifty trick with a playing card, and a tornado strikes a small Illinois town; a woman is born during the tornado and later meets the man who set it in motion; 1,200 years earlier, a man who is supposed to be stoned to death discovers he has an uncanny knack for surviving; and, back in the present day, another man speaks only in the present tense. Comparisons of this novel to the works of Tom Robbins are both obvious and appropriate: the story meanders around in an entertaining manner, never getting too serious about itself; the characters are splendidly loopy, close to caricature but never quite reaching it, and the situations in which they find themselves are comic, dramatic, and everything in between." (Booklist)

What listeners say about Nine Kinds of Naked

This is a fun read!It reminded me of something Christopher Moore would write and that is GOOD!It's nonsensical but makes sense.Listen to it!Kristin Kalbli is a wonderful choice for a narrator.I was gifted this copy for a fair review.

Would you listen to Nine Kinds of Naked again? Why?

Yes. Keeping up with the narrative is an interesting journey.

This is an excellent listen.

Few writers have enthralled, entertained and inspired me with as much awe and admiration as Tony Vigorito. Metaphysics and humor are equally difficult as genres for a writer. Tony is a Master Philosopher and Humorist. The highest compliment I can give anyone, as a writer myself, is to say "I wish I had the intelligence and ability to write like that." I don't and I can't.
However, I am thrilled that I listened to this audiobook (and the two others written by Tony)!
(Kristin Kalbli gives a brilliant performance as the narrator.)
...as for writing, I will settle for using a few dozen sentences from the book as memes on social media.... maybe people can be "dumbed up" enough to wake up!

entertaining. funny. worth a listen

nine kinds of naked was funny and entertaining. it had the wacky characters and mishaps of a tom robbins novel... but it did fall short a bit of robbins wacky genius. nonetheless i did thoroughly enjoy it and a good time was had by all.

Synchronicity on the sultry soothe of your day!

Love it. It's all I can do not to blurt out "Cherry shit" in every awkward pause.

Soothing combination of chaos and synchronicity

If you could sum up Nine Kinds of Naked in three words, what would they be?

What other book might you compare Nine Kinds of Naked to and why?

I don't know if there's any story to which I could compare Nine Kinds of Naked, but Tony Vigorito's writing is in the same vein as Tom Robbins.

Who was the most memorable character of Nine Kinds of Naked and why?

Father JJ Speed/Special Agent JJ Speed was probably the most memorable, but Diablo was my favourite. I loved the way Kristin Kalbli voiced both his character and Elizabeth Wildhack. Those character voices were so pleasant and enjoyable to listen to, which made their already interesting conversations even better.

This is a fantastic, layered story and a great audiobook. I look forward to listening to more of both the author and the narrator.

Pure and simple. Unbridled brilliance. I am very pleased to see this prayer made manifest.

I don't write many reviews but I really like this one. Story is good but I also like the spirit and the theme of love, hope and embracing life. this one stands out for me.

rare combination of fun and insight

The first time I listened to this book it was funny.
The second time I was impressed by the depth of the analogies.
The third time I fell in love with the characters. Bridget Snapdragon is my current hero.
The fourth time I saw a reflection of the world around me and it made me happy to be a part of such folly.
This book just gets more interesting every time I listen.