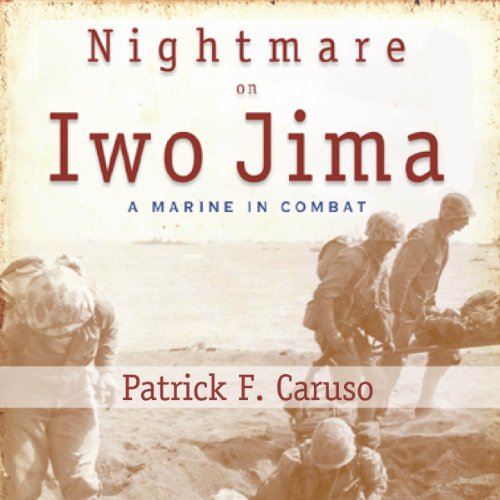 By: Patrick F. Caruso
Narrated by: Charles Craig
Try for $0.00

On February 19, 1945, the 4th and 5th Marine Divisions stormed ashore from a naval support force. Among them was green young Lieutenant Pat Caruso who became de facto company commander when the five officers ranking him were killed or wounded. He led his rapidly diminishing force steadily forward for the next few days, when a day's gains were measured in yards. Caruso was eventually wounded himself and was evacuated.

Realizing that the heroism of his comrades would be lost by the decimation of his unit, Caruso latched onto any paper he could find and filled every blank space with his memory of the fighting. This is a classic account of the experience of being in close, direct, and constant contact with a determined enemy at close quarters. Many did not survive; those who did were changed forever.

"A tale of individual struggles as fresh and crisp as if the battles were yesterday... Caruso describes the island's terrain of hot, dark volcanic ash so soft and fine that foxholes could be dug by hand. He tells of the hidden enemy gun emplacements that brought fire to every inch of the island and the terrible price paid in casualties to find and then destroy them. Gripping... without pretense or embellishment." ( Leatherneck)
"Although compact and brief, the book eloquently describes the horrors of the World War II battle for Iwo Jima... From such a nightmare Caruso manages to build a significant literary memorial, a clear and lasting picture of a handful of fighting Marines." ( Associated Press)

What listeners say about Nightmare on Iwo Jima

History In the Making

Would you listen to Nightmare on Iwo Jima again? Why?

Yes, a lot in the book - some things I might have missed.

What other book might you compare Nightmare on Iwo Jima to and why?

Which character – as performed by Charles Craig – was your favorite?

thought it was well done and kept my attention and interest.

Would you try another book from Patrick F. Caruso and/or Charles Craig?

Would you listen to another book narrated by Charles Craig?

Good story but the narrator is terrible. It was hard to make through the whole thing due to this.