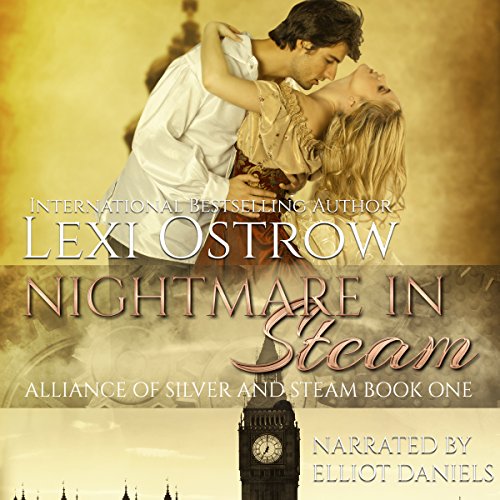 By: Lexi Ostrow
Narrated by: Elliot Daniels
Try for $0.00

Eliza Kempe Dorley is always left in the background. As a female, being top inventor for the Alliance of Silver and Steam has as many draw backs as perks. She's in charge of the creation of the many tools the Alliance uses in pursuit of the demons that run lose in the London Underground, which means without her, the demons would be harder to put down. It also means she misses all of the action and has never had the chance to really use any of her inventions.

Lucius Cooley Willan is a Nightmare Demon with a penchant for gambling and sleeping with women he shouldn't and it has landed him in hot water. Now he spends his nights slinking in human dreams and unleashing terrors so strong it kills them so he can capture their soul for his boss. But when he's ordered to attack the group that hunts his kind he's enthralled by the feisty inventor he comes upon.

Eliza is victim to Lucius in a way no others have been, a sensual dream that she can't shake when she wakes up. When he bumps into her at the trains, she's an addiction he can't shake. When he outright disobeys the demon who controls him for some out-of-dreams interactions with the Eliza, it will be up to him to save her from the nightmare he's put her in.

What listeners say about Nightmare in Steam

Sometimes we don't get to choose who we love!