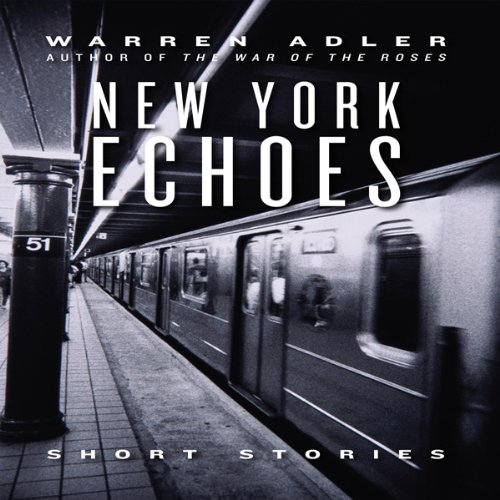 By: Warren Adler
Narrated by: Cynthia Nixon
Try for $0.00

New York itself becomes a character in these seven deftly crafted and compelling stories. As in his celebrated novels, Adler's themes in New York Echoes deal primarily with human relationships ¿ the mysterious nature of love and attraction; the fragile bond between husbands and wives, and parents and children; the divide between generations; the obsessive pursuit of the creative artist and the emotional toll it exacts.

In these stories past memories collide with present realities; with first love comes first betrayal; and chance encounters have unexpected consequences. The stories read in this collection are: "Good Neighbors"; "The Mean Mrs. Dickstein"; "East Side, West Side"; "The Cherry Tree"; "Gone"; "Pregnant"; and "My Father, the Painter".

Warren Adler is the author of the best-selling novels The War of the Roses and Random Hearts. A native New Yorker, he was born in Brooklyn and is a proud product of the New York public schools. He happily lives in New York City after a 40-year absence from his native soil.

Best known for her role as the workaholic lawyer Miranda Hobbs in Sex in the City, Cynthia Nixon made a memorable film debut in Little Darlings. Her Broadway credits include The Last Night of Ballyhoo, Indiscretions, Angels in America, The Heidi Chronicles, and The Women. She has the unique distinction of appearing in both Hurlyburly and The Real Thing at the same time. She will be reprising her role as Miranda in the film version of Sex in the City to be released in May 2008.

"Adler writes with skill and a sense of scene." ( The New York Times Book Review)

I mainly bought this because I like Cynthia Nixon narrations, but I ended up liking the stories very much. I even bought the printed version so I could read all the stories because this is abridged. It's a great price, too. I recommend it.

The stories draw you in, the writing is seamless, and the plots intriguing. My only other observation is, for all the apparent emotionalism, they lack a certain undefinable depth. Perhaps, the depth of agony would be too melodramatic to express. I think Mr. Adler’s way with them is close to perfect.

If you could sum up New York Echoes (Unabridged Selections) in three words, what would they be?

I love anything NYC based and these short stories captured real human emotions in the characters and the themes woven into the book.

Which character – as performed by Cynthia Nixon – was your favorite?

She was amazing at portraying each character with a New York flair and adding a sense of richness to the endearing people in the stories. I absolutely loved her narration!

I will definitely listen to this again and again.