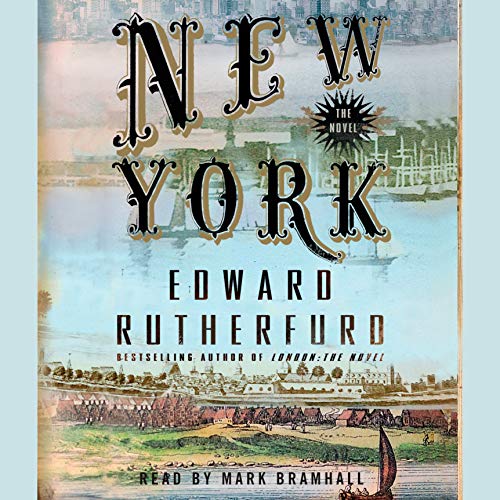 By: Edward Rutherfurd
Narrated by: Mark Bramhall
Try for $0.00

The best-selling master of historical fiction weaves a grand, sweeping drama of New York from the city's founding to the present day. Rutherfurd celebrates America's greatest city in a rich, engrossing saga that showcases his extraordinary ability to combine impeccable historical research with storytelling flair. As in his earlier, best-selling novels, he illuminates cultural, social, and political upheavals through the lives of a remarkably diverse set of families.

As he recounts the intertwining fates of characters rich and poor, black and white, native born and immigrant, Rutherfurd brings to life the momentous events that shaped New York and America: the Revolutionary War, the emergence of the city as a great trading and financial center, the excesses of the Gilded Age, the explosion of immigration in the late 19th and early 20th centuries, the trials of World War II, the near-demise of New York in the 1970s and its roaring rebirth in the '90s, and the attacks on the World Trade Center. Sprinkled throughout are captivating cameo appearances by historical figures ranging from George Washington to Abraham Lincoln to Babe Ruth.

New York is the book that millions of Rutherfurd's fans have been waiting for. A brilliant mix of romance, war, family drama, and personal triumphs, it gloriously captures the search for freedom and prosperity at the heart of our nation's history.

"Like James Michener and Leon Uris, Rutherfurd does a magnificent job of packaging a crackling good yarn within a digestible overview of complex historical circumstances and events." ( Booklist)

What listeners say about New York

I truly enjoyed this book but agree with the previous reviewer. In order to get a full appreciation of the chracters and storyline, you need the unabridged version. This is my first experience with Edward Rutherfurd novel and I loved it. I enjoyed it so much, that I am going to purchase the unabridged version.

I was a little surprised to find out this was abridged and wondered what I had missed, still it was a great story.

Not up to his usual standard

I love Edward Rutherford books. I enjoyed this but found some serious problems with it that I have not seen in the other books. In this book Edward Rutherford moves through the history quickly and with little connection. I did not care about the characters or their families. It is as though Mr. Rutherford has decided that the new world is not worth his usual thorough job. That is sad.

Would you try another book from Edward Rutherfurd and/or Mark Bramhall?

I'm not really sure, as it took me such a long time to really get into this book before I started to enjoy it. I am almost finished and it took me practically to the end before I could honestly say that I liked the story.

If you’ve listened to books by Edward Rutherfurd before, how does this one compare?

This was my first one by this author, so I cannot make an opinion.

Yes, I think it did.

Probably, as I like history, but its a long book, so I am not quite sure if I would enjoy the movie.

A wonderful journey of New York through the years

I thoroughly enjoyed this book and following not only the journey of the Master family, but appreciating the amazing history of New York and both the hardships and joy that both individuals and communities share.