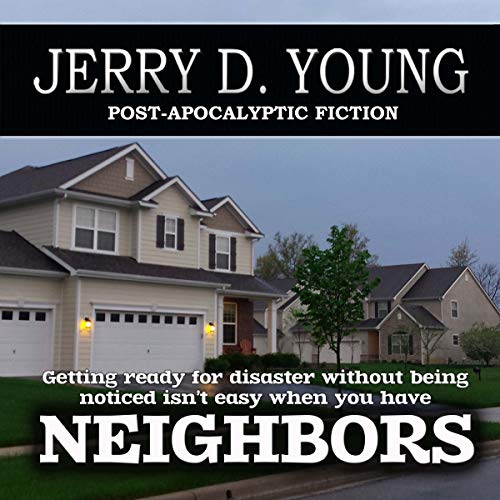 Sometimes neighbors are great. Sometimes not so much.

Hank Smith was a prepper. But he was a prepper with a problem. He lived on a cul-de-sac road, which was good. The bad part of it was it was on a hill. This would normally be good, but in this case, it put him in full view of the approach to the cul-de-sac and of most of his neighbors.

The result of this was that everyone in the neighborhood saw his large garden, his solar panels, his hand well, and the other items that indicated his ability to get by without much help from anyone else.

Even though his neighbors thought Hank was a little nutty, they respected his right to live the way he wanted. However, when a world war breaks out, will they respect his right to his own property?

About author Jerry D. Young: Jerry D. Young has been a fixture in the survival and prepping communities for more than 20 years. The author of more than 100 novels and short stories, Jerry’s writing has been a staple for men and women of all ages and from all walks of life that are interested in prepping, survival, and all-around self-sufficiency.

Jerry’s works are written with the goal of educating as well as entertaining and generally enjoyed by all who seek to expand their knowledge of prepping and survival topics while enjoying a good book or short story.

As daunting as the end of the world, nuclear fallout, World War III, civil unrest, economic collapse, solar flares, EMP attacks, and other apocalyptic scenarios may be, society has always been interested in the “What If?” of a post-apocalyptic world. Jerry’s stories provide interesting and practical perspectives of heroes and villains navigating post-apocalyptic scenarios including everything from Mad Max types of events to more relevant plot lines that seem as if they could have come from the headlines of the modern world.

What listeners say about Neighbors

A good introduction to the concepts of prepping.

So first off, this is a SHORT STORY. Obviously you aren't going to have any character development or much descriptions in such a short story that is covering months of time so although the book lacks these things, it can't really be counted as a criticism, rather just a limitation of the format.

This is not really a character or events driven story, its more a best case scenario, "How to survive nuclear war" primer in the form of short fiction. Its simple, straight forward and easy to understand. There is nothing new, surprising or memorable there if you've read pretty much any other post apocalyptic or disaster fiction. There are no bad apples or traitors in the community, no mistakes are made, is as saccharin and predictable as a 1950's civil defense film reel.

This does not make it bad. It just makes it what it is, a short, palatable example of what a community could do to survive nuclear war. This is not really a book for preppers, its not going to bring out any new ideas or concepts to anyone who has already started prepping.

What is a good book for is people who have never really thought about prepping before. As a simple, non threatening, 'sanitized' version of nuclear war it would be easy for anyone to listen to and if it was their first exposure to the concepts, give them a lot to think about and a lot of prepping 101 type information with just enough story to keep it interesting through its short run time.

It would also be an excellent introduction to the subject for kids. The whole time I was listening I was imaging it as a 'magic schoolbus' episode (what can I say, I have a three year old who knows how to run netflix) In fact I think this would make an excellent illustrated book for kids from the right kinds of families. Its just dangerous enough to get the point of prepping across without doing so in any kind of threatening way.

As for the audio part of 'audiobook' this one is just acceptable. It was obviously produced with a low budget and B list reader. You can hear pages being turned, background noises and clipped words and over long pauses where edits where made. It gets the job done but has a noticeably amateurish production value. Not a big deal but it doesn't really add anything to the experience.

I really like Jerry D. Young books at Audable.
I'm hopping the rest of his books will come out
on audiobooks.