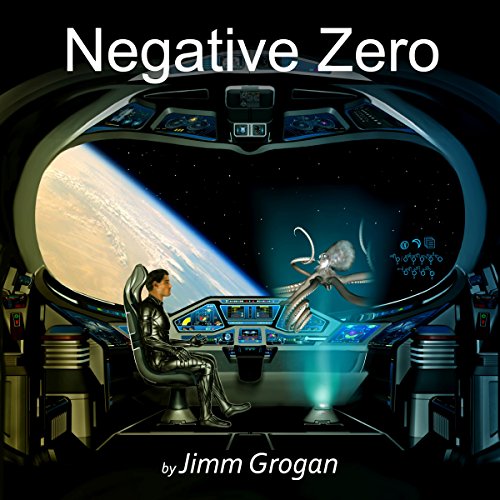 By: Jimm Grogan
Narrated by: Clay Teunis
Try for $0.00

Tomek lives a seemingly quiet life as a spacecraft engineer for the interstellar Azten Empire of Federated Worlds. But no one knows that during Tomek's frequent "vacations", he volunteers for his planet's police force, tracking down convicted criminals and delivering them to justice. Known for taking on cases that no other volunteer will touch, Tomek uses the code name Negative Zero in order to protect himself and those he loves.

Tomek takes on the investigation of a lifetime when he tracks down those responsible for two major crimes: one in which thousands of farmers die of a suspected plague and another in which the mass murderer uses a mysterious drug to force victims to hand over their wealth before dying. As Tomek unravels the mystery behind those responsible, he is confident they will be brought to justice.

But the sinister Trident group has other plans in mind when they eventually find out who Negative Zero really is. As they close in on his location, using corrupt imperial guards as their henchman, Tomek must fight for his life if he is to survive.

Jimm Grogan earned an associate's degree in electronics and a bachelor's degree in computer science before launching a career as an engineer for Hewlett Packard, Inc. and PMC-Sierra, Inc.

Grogan lives with his spouse in Northern California.

What listeners say about Negative Zero

I love a book with a strong protagonist hero that you can relate too. I love that this story was riveting and detailed without being vulgar with language or sexual situations.

This story is a fun adventure into the sci-fi realms of star travel with different alien beings. It has mystery, intrigue, action, and even conspiracy politics to rattle the imagination with excitement.

It's hard to develop a character who's written to be perfect from the start.