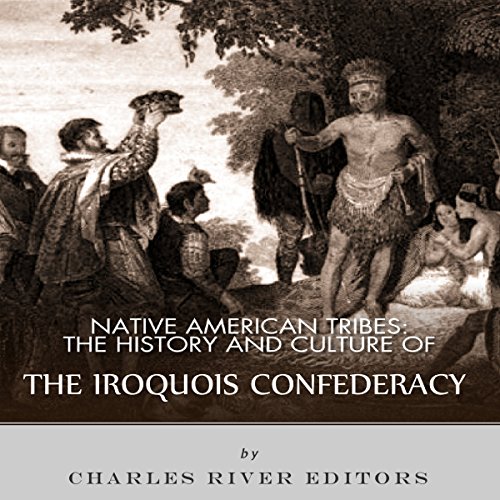 Native American Tribes: The History and Culture of the Iroquois Confederacy

From the "Trail of Tears" to Wounded Knee and Little Bighorn, the narrative of American history is incomplete without the inclusion of the Native Americans that lived on the continent before European explorers and settlers arrived in the 16th and 17th centuries. Since the first contact between natives and settlers, tribes like the Sioux, Cherokees, and Navajos have both fascinated and perplexed outsiders with their history, language, and culture. In Charles River Editors' Native American Tribes series, listeners can get caught up to speed on the history and culture of North America's most famous native tribes in the time it takes to finish a commute, while learning interesting facts long forgotten or never known.

Among all the Native American tribes, the Iroquois are some of the most well-documented Native Americans in history. Indigenous to the northeast region of what is now the United States, and parts of Canada, they were among some of the earliest contacts Europeans had with the native tribes. And yet they have remained a constant source of mystery.

The name "Iroquois", like many Native American tribal names, is not the name the people knew themselves by, but a word applied to them by their enemies, the Huron, who called them Iroquo (rattlesnake) as an insult. The French later added the suffix "ois". Moreover, the Iroquois are not even a single tribe, but a confederation of several different tribal nations that include the Seneca, Oneida, Onondaga, Mohawk, Cayuga, and the Tuscarora, who didn't become part of the union until the early 1700s. The name Haudenosaunee (pronounced "ho-den-oh-SHO-nee") is the name the people use for themselves, which translates as "the People of the Longhouse". They are also commonly known as the Six Nations.

What listeners say about Native American Tribes: The History and Culture of the Iroquois Confederacy

Not Everything I hoped For But...

Not Everything I hoped For But... I was expecting more grit and bones to this book. Failed to see (when I bought it) that it was only 52 minutes. So, a good overview, but look elsewhere if you wanted a in-depth history, as I was, because you ain't getting it here.Otherwise, a tidy and small look at the Iroquois Confederacy.

the narration seemed rushed and flat. the information contained was good, but it lacked warmth and enthusiasm.

very in liking book. I learned something about man They destroyed a nation of people