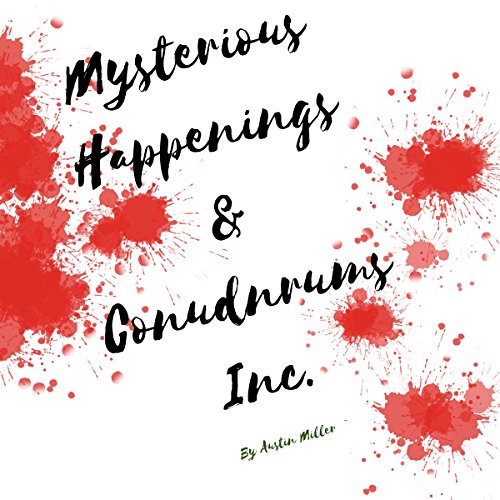 Since the day that Tom Middleberry was rejected by the International Federation of Magical Law Enforcement, he has never been the same. He spends his days at his detective agency, Mysterious Happenings and Conundrums, Inc., trying to eat, drink, and smoke his tragic life away - until the murders, that is. Tom doesn't give up his gluttonous habits, however - for the first time - there's a sense of purpose in his step.

When a new string of murders, accompanied by art theft, soon occur, Tom begins to fear that the federation will take over his jurisdiction and steal the only real case he's ever had. Tom moves quickly to recruit his old partner, Charles. Charles is a family man and is reluctant to join forces with his old partner due to differences in character, but when he hears there is prize money involved and a chance to go up against the federation, he readily accepts.

Mysterious Happenings and Conundrums, Inc. is a fantasy mystery intended for a young adult audience. It combines dark humor, mystery, magic, and an intriguingly genuine cast that will pull you in from the start and leave you wanting for more when you're through.

I would...its short and well narrated....and a great little story!

Which character – as performed by Barbara Benjamin-Creel – was your favorite?

She was excellent...I am going to say the Beaver

Tom is an alcoholic, chain smoking magical detective...who receives his cases through paper airplanes...lol He teams up with his old partner Charles to solve a mystery of murders and stolen artwork...when the wrong suspect gets fingered for the crime, Tom does not give until they prove the beaver innocent!!

a fantasy/mystery/fable with giggles on top

Although this reads like a children’s book, don’t be fooled. It is a fantasy. It is a fable. It is a gentle satire. It is a little jewel box filled with treasures, and it is an absolute delight, but it is not a book for children.

The setting is a place where beavers run ferries, and ladies live in mushroom houses; where magic is a part of everyday life (and crime), and where when guys go to the local “club” they play ..croquet! It is also a mystery, though, and, in its context, the author follows all the rules for mysteries, so that we *could* solve it before the intrepid? Sleuth does. But, along the way, the author touches on a truly broad range of topics, from crime fiction to law enforcement, to philosophy and art, laughing at many things, and putting them into a perspective that shows sometimes hilarious aspects to them, and even more, to our assumptions about them. Nothing is beneath this author’s scrutiny, and that scrutiny is both revealing and, in its way, compassionate.

I chortled my way through this little gem, and thoroughly enjoyed the exquisite narration, as well. The narrator really does use her voice and skills to enhance this charming story, and she does, to perfection.

I give both book and narrator 5 out of 5 stars, and dare you to read this and NOT crack a smile. (you’ll laugh out loud, I think, actually.)

I received a free copy of this book in exchange for this unbiased review from AudioBookBlast dot com.

What did you love best about Mysterious Happenings and Conundrums, Inc.?

I really liked the characters, they all seemed to come off the page, or in this case out of the words.

Look at the previous answer. Also the fact that the plot points managed to be both goofy and interesting at the same time.

Have you listened to any of Barbara Benjamin-Creel’s other performances before? How does this one compare?

I have, and this was improved from there, I think this book suited her better though.

I received this for free in exchange for an honest review.

Very cute short (just over 2 hours) audio. I believe this should be listed as young adult, but I enjoyed listening to it. The characters really are characters! If you like light-hearted detective stories with magic and talking animals, you'll like this story.

The narrator, Barbara Benjamin-Creel, was very good; the only complaints are that the voice she used for one of the males sounded female and her Southern accent sounded more British than southern.

I got this free from the author via AudiobookBlast for an honest review.

Entertainment at its best!

This is one of those books you don't want to stop listening to. The story line is so well written, it had me sitting on the edge of my seat wondering what was happening next. The characters had depth and wit and you really became to know them as the story goes on. I prayer there is a sequel to this hidden treasure and will definitely be recommending it!

I was actually surprised with this story and I love the authors take on detail, plot, and the characters. It was a fun story, filled with mystery, some magic, and loveable characters, especially the talking animals. I will admit that this story could be for teens but for adults as well. I think you could specify this as a story for teens. I read YA stories all the time and I can assure you that I'm no teen. I think this would be a great start to a new series. I highly recommend to the author in doing just that. I would put this story as book 0.5, a short story and write a longer story and put let it be book 1. I suggest if you were to do this that you make the story at least 8 hrs. I have seen how well a story will sell providing the length of the book. I did enjoy this story immensely and tell you to give it a listen. I know it's a 2 he story but give it a listen. If you don't like it as much as I did then remember Audible's refund policy.

Barbara Benjamin-Creel did a good job with her narration of this story. I did think at times that she should've used a more manly voice. For instance, Charles's voice sounded exactly like a females. I actually thought it was a female character until I learned Charles was a man and married. So I recommend the narrator doing some work with her male voices and accents. I overlooked that and. I still found this story enjoyable and fun. Overall, I'm giving it 5 🌟.

I received this audio at no charge from the author/narrator in exchange for an honest and unbiased review through Audiobook Blast.

If you could sum up Mysterious Happenings and Conundrums, Inc. in three words, what would they be?

Would you recommend Mysterious Happenings and Conundrums, Inc. to your friends? Why or why not?

I would recommend it. The story started out great and it kept you intrigued. The combinations of magic and regular detective are blended in an intresting way. It doesn't overtake the story but it definitely peaks your interest. However I must say I was disspaointed with the ending. It felt like the ending was lackluster and it could've been better. However, the reason as to why it ended the way it did is explained. I am not a fan of this, but anyone who doesn't have a problem with this might enjoy the ending.

She voiced every character differently and according to their traits. If i'd read the book I wouldn't have experienced the amazing accents and dramatization.

I listened to it in one sitting since it was fairly short.

What a strange book. At first I thought I was listening to a children's book, but then realized no way can it be a kids book (language). This is kind of like a fantasy book. It is good and the narration is awesome, but it was strange too.

The author, Austin Miller did a good job on his story. It left me kind of baffled. I wasn't sure what genre it was even after listening to it. It is definitely mysterious! The narrator, Barbara Benjamin-Creel did a superb job on the delivery complete with multiple voices and wonderful accents.

I won this audiobook in an Eargasms contest.

This is a fun ,short book to listen to.Barbara Benjamin-Creel does a fine job narrating the voices in this story.There are animals running ferrys,people being killed,etc.
Tom is a detective who recieves his mail via a paper airplane thru a window.He flunked out of REAL detective school and the big boys don't want to play w/him.He falls into a murder investigation when he is called upon to investigate a theft of an art piece.The plot thickens from there,as does Toms waistline,as he is a gluton and proud of it.It's funny and fresh.Give it a listen.
"I was provided this audiobook at no charge by the author, publisher and/or narrator in exchange for an unbiased review via AudiobookBlast or MalarHouse

Interesting Premise Made Better by Reader

Would you listen to Mysterious Happenings and Conundrums, Inc. again? Why?

Perhaps I should listen to this book again, as there were several details that I feel I may have missed in my first listening - especially trying to determine the species of most of the cast (human or animal?).

The story's swamp setting and colorful cast of character voices got my attention right off the bat, and I couldn't help but be reminded of the old comic strip 'Pogo', which was populated by talking woodland creatures. I must have had that talking animal comic strip in mind so much that I assumed that the entire cast were comprised of talking animals, a misapprehension that was only confirmed by the presence of a talking beaver. Later in the story I realized that some of the cast were humans, and I never fully untangled that question in my first listening. I was bored by the well-worn solution to one of the books mysteries, which made me wonder if this was in fact intended as juvenile fiction, however, there were instances where the author gave these characters profane dialogue and casual adult attitudes that clashed with the previously established quaint nature of this magical swamp setting. The society of magic users isn't a new concept but it has been done better by other authors. In this book it feels like we've just sprinkled on some Harry Potter HOWEVER that doesn't mean that I don't think that there's not an opportunity for improvement, because the initial concept is still interesting and could lead to a fun series of books featuring these paranormal investigations.

Have you listened to any of Barbara Benjamin-Creel’s other performances before? How does this one compare?

I have listened to one other book by this voice actor but the previous audio book was a modern day fantasy story and did not provide a reason to feature the sort of colorful cartoonish style characters in this book. It felt very nearly like listening to an animated cartoon during some scenes, which speaks to her voice skills.

Less snazzy/glib dialogue and more time building characters and their back stories so that the reader/listener will remember if the characters were humans or talking animals. The author might want to consider whether they're aiming at a juvenile audience or an adult audience and adjust the dialogue accordingly.