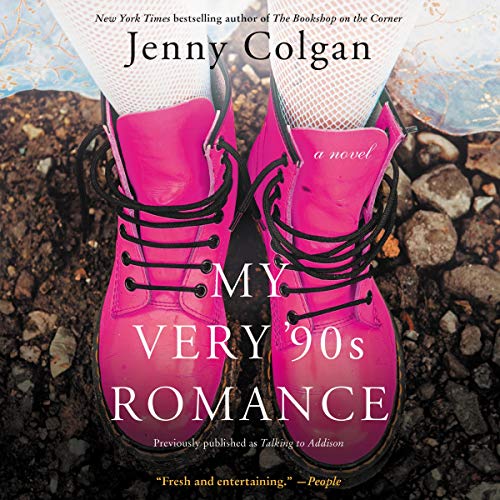 By: Jenny Colgan
Narrated by: Lucy Price-Lewis
Try for $0.00

From New York Times best-selling author Jenny Colgan comes a hilarious romantic comedy about a down-on-her-luck florist whose future begins to bloom when she takes on the challenge of helping to transform her nerdy roommate.

Holly is a frustrated florist whose life doesn’t seem to be coming up roses. Fleeing a roommate situation from hell, she moves in with a motley crew of friends - Josh, a sexually confused merchant banker; Kate, a high-flying legal eagle with talons to match; and Addison, a gorgeous computer geek who spends his days communicating with his online girlfriend and anyone who worships at the altar of Jean-Luc Picard. From the moment Holly catches a rare glimpse of Addison, she’s smitten. The only problem is how to get him to swivel his chair from the computer screen to her adoring gaze.

After a series of false starts - involving a new friend and mathematician, Finn - Holly coaxes Addison away from his computer screen and out into the open. While “out in the open” spells disaster for Addison, curiously, her own future begins to bloom. Holly and her friends make desperate attempts to connect with Addison, drag him away from his fiercely possessive girlfriend, Claudia, and get him to communicate with the real world.

With Jenny Colgan’s trademark wit and a cast of unforgettable characters, My Very '90s Romance will capture your heart.

What listeners say about My Very '90s Romance

I have read most of Jenny Colgan’s books and eagerly awaited this one which I ordered for pre-sale. I don’t know what happened but this book just does not have the characters, interest etc. that are in her other books. I would not recommend this book.

Love Jenny Colgan but not my fave book

Narration was great but overall just didn't think the story was strong and probably my least fave book of heres taht I've read so far. Absolutely love just about all of the other books by her that I've read.

Lucy Price-Lewis always brings the characters and story to life. One of my favorite narrators..

Not one of her best

Holly is really hard to like. Her persistent meanness about Claudia is persistently superficial and shallow. Referring to her as "Moby DIck" and saying things like, "Let's hide behind Claudia" is downright shameful, in every sense of the word. Really, Jenny Colgan? Addison proved to be the only one with the depth to look beyond her exterior.

This is the first time I've seen Jenny Colgan's writing as lazy. She gets some basic facts wrong that would not have been hard to get right. For instance, she uses Star Trek and Star Wars references interchangeably. Also, she seems unaware that you cannot have full-on conversations with someone who is on a ventilator (even if he does claim to be God).

Generally, it's a good story, if not as good as the author's other books.

This book is well written, the story and theme were just a bit young for me. Love Colgan’s work though.

I have read or listened to every book by this author and love them all. This one was a little disappointing. Lucy Price -Lewis is my favorite narrator and while part 1 of this book was really good, part 2 lost me. It went did hill and got a little silly. The book is quite funny and still enjoyable but not my favorite. Still a huge fan of her writing.