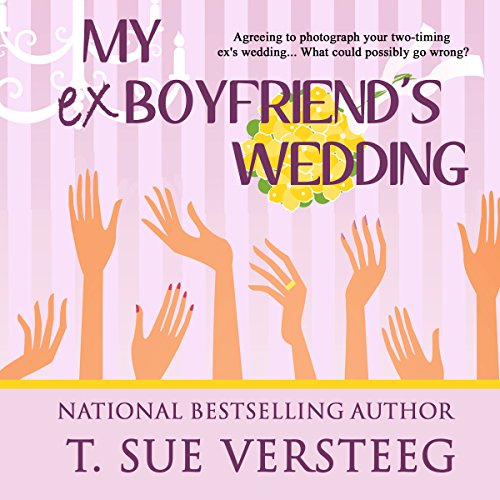 By: T. Sue VerSteeg
Narrated by: Melissa Moran
Try for $0.00

Most women have them: those two very distinct, very different voices in their mind. One can usually be chalked up to common sense; the other to mischief, mayhem, or just plain morbid curiosity. Both are always there, though, ready with their two cents' worth.

Jemma Keith is no exception to the rule. She doesn't have a problem agreeing to photograph her cheating ex-boyfriend's wedding. The dilemma, however, is what to do once she gets there. Common sense feels like taking the high road; she can handle being the better person. Mischief wants to slither in, crashing the whole affair down around his worthless ankles.

What's a woman to do when she can't make up her mind?

At least both sides are in complete harmony about the bride's cousin, Anthony Giovanni: he's hot, handsome, and oh so tempting.

Join Jemma as she weaves through a web of lust, temptation, revenge, and maybe even love.

What listeners say about My Ex-Boyfriend's Wedding

This was a cute story of two people falling in love. Until it escalated into more drama than expected. Witty dialogues, great family interactions, even some action. This might have been a short read but it packed a lot. First read by this author and I'll be searching for more of her work. Melissa Moran's performance was spot on. Looking for an entertaining read to brighten up your day then this is for you

I THOUGHT THIS WAS GREAT!!!

I loved it ALL...it was funny, a great story, good narration....and an overall fun listen!

What other book might you compare My Ex-Boyfriend's Wedding to and why?

Its a comedy/romance...and its super cute...I am sure there are others...lol

Which character – as performed by Melissa Moran – was your favorite?

Yes and I did!

This is a woman scorned, gets, even, and comes out ahead story, with lots of comedy and snarkiness! Gemma catches her boyfriend Dalton cheating on her and leaves him, then months later he recommends her to photograph his upcoming wedding, just to be cruel to her...well this doesnt stop her, and hilarity..drama and new romance happens...and I couldn't stop listening!!! I RECOMMEND!!!

It is fun and entertaining. Melissa Moran gives a wonderful animated performance.

What was one of the most memorable moments of My Ex-Boyfriend's Wedding?

Perhaps when Jemma catches Dalton cheating with Stacy or when Jemma realizes Dalton purposely kissed her right in front of Tony. Maybe when Jemma drinks all of Dalton's expensive wine while being locked in his wine cellar or when Jemma spots Kate tied up in Dalton's trailer. Tough choice as there are lots of memorable moments.

Have you listened to any of Melissa Moran’s other performances before? How does this one compare?

No, but she has a very fun and light quality to her voice, so I will look for other books she has done.

Yes, this book makes you laugh. It has a lot of comedic situations and the narrator captures them perfectly. It is also a bit steamy. Not too graphic, but it definitely contains adult scenes.

This is a fun book. I received this book free in exchange for an honest review.

Not romantic, not comedic, not worth the time. I want to say this is written for 12 year olds, but pre-teens are more sophisticated than this author.

Super Fun! I LOVED IT

What made the experience of listening to My Ex-Boyfriend's Wedding the most enjoyable?

An everyday story, of an everyday girl (with a little extra steamy details and the hot Italian guy), funny, delicious, and somewhat of a 'the ass of an ex got what he deserved' thingy, I really enjoyed listening to it very much.

What does Melissa Moran bring to the story that you wouldn’t experience if you just read the book?

She is an excellent narrator and makes the story even funnier, I really liked her performance very much.

I received this audiobook in exchange for an honest review. All thoughts opinions and ratings are my own. I was under no obligation to post a review or give positive feedback.
I hope this review was useful to you and helped your decision to read or not read this book. I love reading and sharing my opinions with other readers.
Thank you very much T. Sue VerSteeg and Melissa Moran for this book.


Jemma is a wedding photographer. She is pretty successful at it, as well. However, for some unknown reason, she has agreed to photograph her horrible ex-boyfriends wedding.

In the midst of the event, her ex-boyfriend starts a rumor about her making everyone at the wedding give her an evil eye. She has her eyes set on a new boyfriend, but rumors, misinformation and awkward situations have him running in the opposite direction.

Will she be able to find her way to this next romantic interest?

The writing is fantastic. I had a really good time listening to this mostly romantic comedy. It is definitely chic lit and I think most everyone can relate to it.

Melissa Moran's narration was very good. I was able to tell the difference between each of the male characters as well as the female characters. They were given their own voice figuratively and literally.

There are some scenes that are slightly more intense than a soap opera – in the soap, he carries a woman off to a bedroom and they wake up the next morning – this has a few more details about the night together.

I know this is short, but a lot of information was given on the promotional page, "the publishers summary" so I don't want to be repetitious by pointing out areas that they have as well.

I was given this book in review exchange from my review. That being said, I consider myself a fair. It was really enjoyable and I would compare it to something like Bridget Jones's Diary or something by Sophia Kinsella or Marian Keyes-two of my favorite authors!


I enjoy leaving reviews, as I know that I read the reviews of others before I purchase a book. If you found my review helpful in your decision about this book, would you please select yes directly below this paragraph? Thank you so much.

Please consider "following me" here on Audible.com. I purchased a lot of books by well known and authors that I am faithful to. I also have the opportunity to review books in all genres, many that I would not pick up on my own. I have been pleasantly surprised by new authors and narrators.

It was funny and fairly realistic.

What was one of the most memorable moments of My Ex-Boyfriend's Wedding?

Who was the most memorable character of My Ex-Boyfriend's Wedding and why?

It was a fun storyline and the narrator was awesome. She handled men's voices without sounding ridiculous. There was humor, backstabbing, kidnapping and romance.

This book kept me involved in the story from start to finish. In the end karma was exactly right.

This book was exceptionally funny, just what I needed to lift my sprits.
"This audiobook was provided by the author, narrator, or publisher at no cost in exchange for an unbiased review courtesy of AudiobookBlast dot com.

Multiple Turns, Over all an entertaiing book

If you could sum up My Ex-Boyfriend's Wedding in three words, what would they be?

Would you recommend My Ex-Boyfriend's Wedding to your friends? Why or why not?

I think I would recommend this, but not through an audiobook. The woman who read this was just too emotional for me throughout the entire book. I even lost concentration while listening because of her voice at times.

I think the narrator was too emotional and too dramatic at times. The points where there was drama, she was too whiny. She made Gemma sound like a 21 year old who was too immature for the story line. .

Who was the most memorable character of My Ex-Boyfriend's Wedding and why?

I think the most memorable character was Gemma or tony. Tony's character reminded me over a man resembling the Fifty Shades of Grey series.

The story line jumped from one scene to another. When I thought the book was over, the actual climactic moment didn't even start. The story went from a woman photographing her ex boyfriends wedding to much more, this is what grabbed my attention, though I had trouble parting from the narrator's voice. Over all, I liked the book. I think with a different narrator, this book would be very intriguing to listen to again. Or better yes, to read alone. There is nothing better than being able to imagine the characters myself.