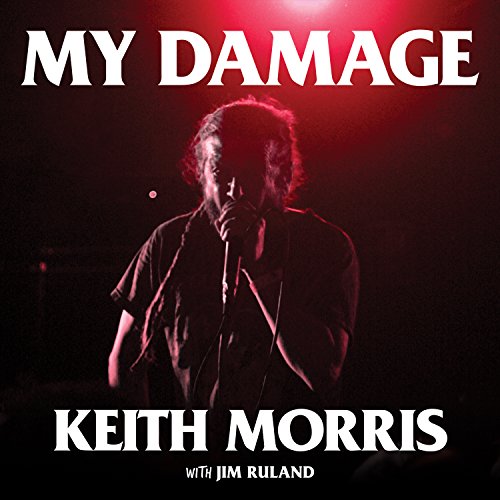 Keith Morris is a true punk icon. No one else embodies the sound of Southern Californian hardcore. Short and sporting waist-length dreadlocks, Morris is known the world over for his take-no-prisoners approach on the stage and his integrity off of it. Over the course of his 40-year career, he's battled diabetes, drug and alcohol addiction, and the record industry.

My Damage is more than a book about the highs and lows of a punk rock legend, however. It's also a look at rock 'n' roll through the lens of someone who has shared the stage with just about every major figure in the music industry and appeared in cult films like The Decline of Western Civilization and Repo Man. It's a Hollywood story from a native's perspective. My Damage is Morris's streets, his scene, his music - as only he can tell it.

What listeners say about My Damage

keith has such a humble perspective on music, and a very realatabe, perspective on punk and music on general. Keith comes across as genuine and has a great literary voice.

The narrator has a great voice but should have done more homework. He pronounces Fugazi wrong and sounds like an ass.

Honest and Ready to Live

First off, I was dissapointed that Keith Morris did not read the memoir. Mr. Morris has a wonderful voice which would have made the story come to life in a manner this audio book did not. Had I known he was not reading I would not have bought this and would have read the book myself.

As for the story, it was awesome. I really enjoyed it, cringed at times, and left me hoping for the "break" he deserved. Mr. Morris is the ultimate front man, having seen him with the Jerks 6 times and with Off 4 times, each time is as exciting as it was that first time in 1985. He appreciation for music that is good, not just punk or hardcore, just music.

Mr. Morris is what Rock n Roll is all about.

A down-to-earth rock memoir that minus rock star cliches.

Well balanced storytelling that keeps your attention throughout. No pretentious nonsense or post substance abuse preaching. Th narrator does a fine job, but I am very disappointed that the audio isn’t read by Keith himself. He is very animated storyteller and his vocal persona would have been exceptional on this. This book is a must have for any American punk music fan.

For the autobio of one of the all-time best voices in music, why is it being read by a narrator? The guy is ok but very dry. Also he mispronounces Fugazi!!

As for book itself, it’s pretty entertaining but barely talks about the content of the music and albums, which is odd.

Amazingly vivid recollections of a true American icon. Every chapter had me on the edge of my seat saying, "No f-ing way!"

This is a must read for any punk rock fan but I think would also be of interest to anyone who is striving toward a dream. Keep going.

I was reminded of some bands I'd forgotten about and turned on to some I didn't know about (Off! rocks). I was inpsired. I was floored. What a great addition to all the work that Keith Morris has put out there. Thank you!

This is the best book I've read/listened to in a very long time. It was a very therapeutic experience to hear about his past mistakes and how he regrets them and how he has changed as a person. He wasn't perfect, but he's ended up a better man than he once was. All I can say is I can relate. I've done a lot of things I'm downright ashamed of, but I can't go back and change them, all I can do is learn from those experiences and do my best to be better as time goes on.

A must read for anyone interested in the history of punk rock. full of fascinating tales of the California punk scene. the narrator kinda sounds like Keanu Reeves, it would have been better with Keith reading but the narrator does a good good.

If you don't like Keith well you're not Punk Rock!

Grew up in OC during this time. I loved the scene. I wish growing up I had a mentor like Keith. I would probably be dead, but hey " live fast........

Great book! I have been listening to Keith's music since I was 9 years old and have always been fascinated with his work. I don't always agree with his viewpoints but I respect his honesty and how he carries himself. This book captures all that is Keith Morris and everyone should read this book, not just punks. He delivers a true and honest story and it is very relatable. Bravo!