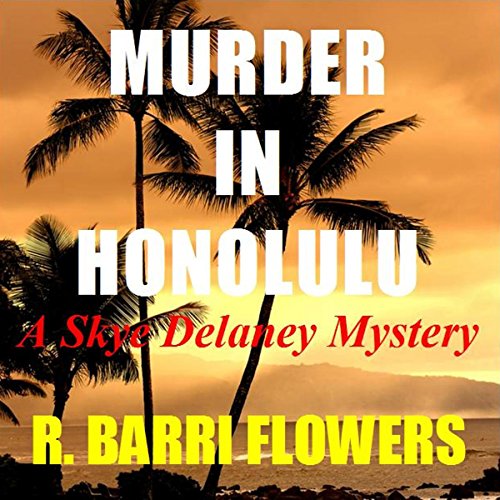 From R. Barri Flowers, the best-selling author of Murder in Maui: A Leila Kahana Mystery, comes a tropical island thriller novel set in the paradise of Hawaii.

Skye Delaney is a private investigator, security consultant, and ex-cop who lives in Waikiki. When her ex-husband and former prosecutor turned businessman, Carter Delaney, asks her to find out if his new wife Darlene is having an affair, Skye reluctantly agrees to take the case. Little does she know that it will turn out to be far more than infidelity.

Skye confirms that Darlene is not only having an affair but also doing drugs. But before Skye can tell this to Carter, she finds him dead in her Jacuzzi bathtub with an apparent suicide note stuffed in his mouth.

Did he really take his own life with so much to live for? Or was Carter murdered?

The one thing she knows for sure is that her German Shepherd, Ollie, bit an intruder who happened to have AB negative blood. As did Carter. Coincidence?

Skye's current love interest is Ridge Larsen, a homicide detective for the Honolulu Police Department, who also happens to be assigned to this case once it becomes official that Carter Delaney was murdered.

As Skye continues to get deeper and deeper into the investigation of Carter's death, it becomes apparent to her that her ex had many secrets and just as many enemies, making him a marked man. These included working for the Honolulu Prosecuting Attorney as a consultant on a case involving a crime syndicate, being a gambling addict, and being in debt to a loan shark.

While the bodies continue to pile up, Skye puts her neck on the line to find out the truth and nail a ruthless killer who has targeted her for death; even as she tries to maintain her professional objectivity and balance it with her private and romantic life.

Murder in Honolulu is the first book in an exciting new mystery series, featuring Skye Delaney.

"Gripping, tightly woven tale you won't want to put down. Author neatly contrasts natural beauty of tropical paradise with ugliness of murder and aftermath." (John Lutz, Edgar winner and best-selling author of Mister X on Murder in Maui)
"A police procedural of the highest order, mixing equal parts Sue Grafton and Jeffrey Deaver with a sprinkling of Patricia Cornwell." (Jon Land, best-selling author of Strong Justice on Murder in Maui)
"Flowers once again has written a page-turner legal thriller that begins with a bang and rapidly moves along to its final page. He has filled the novel with believable characters and situations." ( Midwest Book Review on State's Evidence)

Shouldn't there be something descriptive that let's the reader believe the story is in Hawaii?
No main characters are Hawaiian, but the Hawaiians are criminals??? Really!?!?! Even the street names and buildings are common English. A few Hawaiian phrases that's it.

The story is ok. Not easily predictable. I may read another Flowers book. But I was looking forward to a book set in Hawaii...remind me of my vacation, some of the sights and locations that I might really imagine the scenes.

Please, Don't title the book in an exotic locale and use it as a selling point to get the reader's attention and not deliver. Fail!