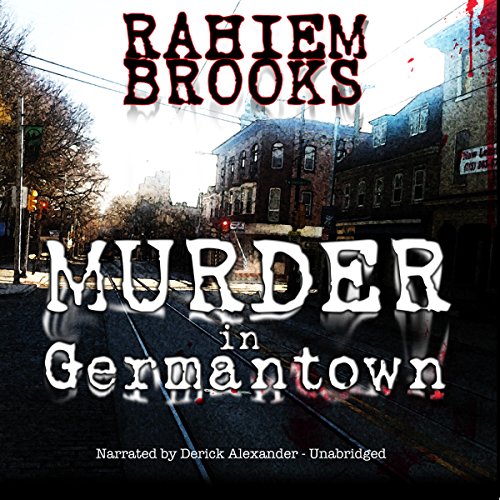 By: Rahiem Brooks
Narrated by: Derick Alexander
Free with a 30-day trial

A smooth, savvy, sardonic, gay, criminal law attorney, Ravonne Lemmelle has been hired fresh out of Harvard Law School to Savino, Martir and Associates, a large Philadelphia firm. A recently separated, single father of one, with a few acquittals under his belt, he's got a soft spot for no one, but the law. On a dark January morning, Wydell James was arrested for killing several people attending a party in Germantown: a section of North Philadelphia. Now he's in a jail cell with no one to turn to, but his childhood friend, Ravonne Lemmelle. One thing makes Ravonne feel powerful; forcing prosecutors to dig deep into their legal coffers to sit across the courtroom from him. His investigation turns up more suspects, a new purpose to kill, and Ravonne realizes the power is closer - and more obtainable - than he could ever possibly known. Things become more complex when two people enters his life: his estranged wife and a serial killer. But Ravonne's one purpose: an acquittal for Wydell James.

What listeners say about Murder in Germantown

Recommend this book to any and all readers. It gave a gay man strength, power, knowledge, family, focus, well, intelligence, sensitivity, emotion, and a sense of direction. The book is well written.

Would you try another book from Rahiem Brooks and/or Derick Alexander?

What could Rahiem Brooks have done to make this a more enjoyable book for you?

the narrator was fine

If you could play editor, what scene or scenes would you have cut from Murder in Germantown?

Almost all with involving the "hero's" child. A 5 yr. wise beyond his years whose purpose is to play sitcom cute for the amusement of the adults - and, supposedly, the readers.

running commentary on what people are wearing and what music they're listening to -just not much story.

I had hoped I would be discovering a new mystery

I had a hard time finishing this audiobook. That being said, I am going to reverse my usual review format and discuss the narrator before the story. The narrator, Derick Alexander, actually has a nice voice. It is very smooth and deep. He needs to work on his pacing and keeping his words crisp. I found myself rewinding several times because I just could not get what he said. I think he has the potential to be a very good narrator. I hope he finds a good coach to help. I would be willing to try another audiobook narrated by him. I can hear potential in his voice.The production values were decent, better than some I have heard.

Unfortunately I do not think I will try another book by the author, Rahiem Brooks. I found the plot very confusing. I really could not follow the audio book. I purchased the Kindle version of the book after I had completed the audiobook to try to determine what I had missed.

I do not have words to describe the problems in his writing style. Allow me to share three quotes:

“He was never without the Burberry trench, sneer, ethics stamped on his yellowish forehead, or adroit police impracticalities glued to his aura.”

“He violently slammed a paw on the table and caused it to collapse. Everything was all over the floor. He did not want that problem, but it was solely his problem.”

“Of all the drug dealers gathered in the home, Low Down was most qualified to get a handle on the conundrum before it commenced.”

I listened to the audiobook and then read the ebook and I still do not understand what Mr. Brooks trying to communicate in those passages.

I am a huge fan of mysteries, both classics like Agatha Christie and modern like John Grisham. I had hoped I would be discovering a new mystery author to explore. What I found were characters I did not care about and a plot so confused I paid for the ebook to try to figure it out.