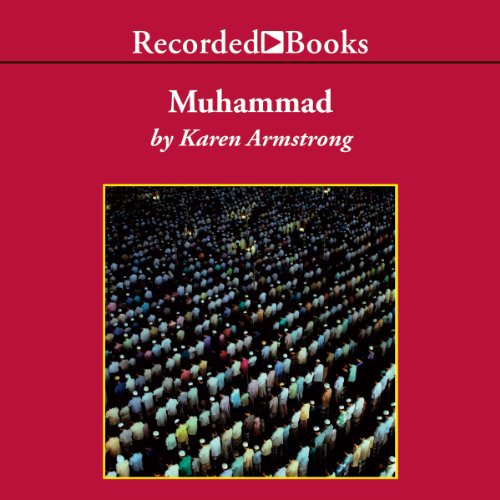 From the best-selling author of Islam: A Short History comes an important addition to the Eminent Lives book series. A former Roman Catholic nun and winner of a Muslim Public Affairs Council Media Award, Karen Armstrong shows how Muhammad's life can teach us a great deal about our world. More is known about Muhammad than any other major religion founder, yet he remains mysterious.

Born in 570 CE, he spent six decades spreading his message of peace and compassion. Yet for many people today, their knowledge of Muhammad is rife with misconceptions and misinformation, often fueled by bigotry. Armstrong sets the record straight, shattering the myth that Islam is a religion of cruelty and violence. One of the world's leading religious experts, Armstrong is a deeply respected voice in the continuous struggle for interfaith understanding. Her cogent assessment of Muhammad's genius and insightful summary of his authentic beliefs are priceless in this modern world troubled by religious extremism and intolerance.

What listeners say about Muhammad

Karen Armstrong did justice with this biography

Where does Muhummad rank among all the audiobooks you’ve listened to so far?

What was one of the most memorable moments of Muhummad?

Have you listened to any of the narrator’s other performances before? How does this one compare?

Full of lessons how to live life, how to become a good human being, presents true shape of Islam. Telling right meaning of words like Jihad and other many things which even today's many Muslims don't know. When Prophet P.B.U.H conquered Mecca he forgives all who hurt Him, who force Him to migrate Medina from Mecca . He didn't force anyone to convert to Islam as some of scholars of today misguiding there disciples that converting other to Islam forcefully is good thing. Worth to listen by both Non-Muslims who want to know about Islam and for Muslims who are misguided my illiterate, greedy scholars. Congratulations to Karen Armstrong for this great work. God bless her.

down to the man

If you'd like to get to the root of Muhammad, then Karen's book is the perfect introduction. She smoothly separates the religious from the secular as well as his economic from political strife in Mecca and Medina. She deftly brings in the Quran where the Surahs intersect with his life transitions. It was eye opening to see how inclusive and revolutionary Islam was when Muhammad was alive. He would be labeled today a radical feminist. It is also saddening how after the leader dies the spiritual movement assumes the role of religious power and control limiting the blessedness of what could be so much more.

THE PROPHET OF ISLAM THROUGH A WESTERN WOMAN'S EYE

"If we are to avoid catastrophe, the Muslim and Western worlds must learn not merely to tolerate but to appreciate one another. A good place to start is with the figure of Muhammad: a complex man, who resists facile, ideologically driven categorization, who sometimes did things that were difficult or impossible for us to accept, but who had profound genius and founded a religion and cultural tradition that was not based on the sword but whose name--"Islam"--signified peace and reconciliation" --Karen Armstrong.

There is more historical data on Muhammad's life than on that of the founder of any other major faith and yet his story is little known. Karen Armstrong's work provides a realistic and healthy rebuttal to the many detractions against Islam's Prophet. Even the most stubborn skeptic of the supernatural would find it hard to disagree that Muhammad was a much better man than the times he lived in. He was, as the author demonstrates, a benevolent social reformer who tried to provide a better path forward than the eclectic paganism of his time and the lawless, dog eat dog system of tribal honor. For example, Muhammad made several social reforms that gave women many rights (rights that women in the west did not receive until the late eighteenth century).

Although Armstrong's study does not concern itself greatly with miracles or the supernatural aspects of the Prophet's life, revelations are mentioned but only in passing. The main bulk of the text concerns the intentions and deeds of the Prophet's life. Contrary to the claims of his detractors, Muhammad was a man who abhorred violence, taking to it only as a last resort and even then he did so under a system of rules, which were far more noble and lenient than the other tribes of his time.

Don't be afraid to broaden your mind,,,give this book a try!

amazingly amazing and so eloquently read.


superb beyond all expectations and a excellently read book beyond the ordinary. well done thank you very much for introducing my prophet to me

strongly recommended . an excellent book that the author has put tremendous effort to complete. she proved to be totally impartial with no prejudice whatsoever

A book that should be read by all people. it puts Muhammad in the proper context of who he was to his people. which is much more than a prophet.

An exellent Book with Unbiased Approach

What made the experience of listening to Muhammad the most enjoyable?

I enjoyed with the narration 10/10. Book was one of the most unbiased and objective book I 've ever read. It is strongly recommended for people who wants to understand the root of this religion.

Excellent inside. I sometimes believe that the West knows more about our prophet and religion that we do. Karen Armstrong book is very humane. Although a ''reasonable'' muslim I learned a lot about my religion from her book. I hope that God accepts her in his Paradise.

She must've studied Islam really hard. I'm a Muslim and I've lived in different Muslim societies and it's hard to me sometimes to explain things.

I knew nothing about Islam before I started this book. It was a great intro into the subject. The author does a very good job giving a prespective on some of the subjects the modern West finds very foreign. Highly recommended.