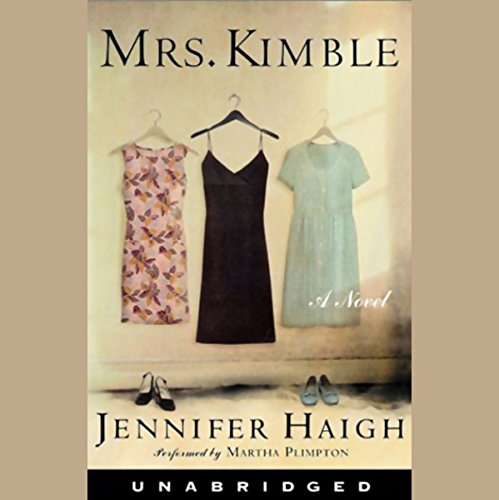 By: Jennifer Haigh
Narrated by: Martha Plimpton
Try for $0.00

Birdie. 1961.
He was the choir director at a Southern Bible college. At practice she followed his hands with her eyes. She imagined his shoulders bare beneath his shirt, his body long and white. One evening he approached her.

Joan. 1969.
She met him at a pool party in Florida. His lank dark hair hung to his shoulders; he wore faded jeans and a colorful cotton blouse. No man had touched her in a year. He was engaged to someone else.

Dinah. 1979.
They met by accident in Washington, D.C. Their paths had intersected once before, when she was a teenager. "You're a beautiful girl," he'd told her, oblivious to the hideous scar on her face. He was old enough to be her father.

Kimble is revealed through the eyes of the women he seduces: his first wife, who struggles to hold herself together after his desertion; his second wife, a lonely heiress shaken by personal tragedy, who sees in Kimble her last chance at happiness; and finally Dinah Whitacre, a beautiful but damaged woman half his age. Woven throughout is the story of Kimble's son, Charlie, whose life is forever affected by a father he barely remembers. Ken Kimble is a chameleon, a man able to become, at least for a while, all things to all women. To each of the three Mrs. Kimbles, he appears as a hero to whom powerful needs and nameless longings may be attached. Only later do they glimpse the truth about this elusive, unknowable man.

A captivating exploration of human love, marriage, and the illusions upon which it is founded, Mrs. Kimble presents a fascinating psychological portrait of a mesmerizing opportunist and the women who believe in him. Beautifully wrought, stunningly original, Jennifer Haigh's sparkling debut marks the arrival of a remarkable new talent.

What listeners say about Mrs. Kimble

Excellent stor. Kept me interested, and was nice and long (lasted lots of trips to the gym!). I really enjoyed this, written with a very different perspective - not of a man's three wives but of the women married to the same man at different stages of his life. Believable and realistic.

very fast moving, but ended abruptly with no real ending at all

What disappointed you about Mrs. Kimble?

MRS KIMBLE was well written, but I had little patience for the characters and this made it hard to continue.

The book opens with the death of Mr. Ken Kimble, and then we are taken back through his three marriages: first to a child-woman who is completely unable to take care of herself or her children when he leaves, then to a working woman who hadn't found time to get married until she met Ken, and finally to a woman who was once his children's babysitter. Each woman is flawed, which allows Kimble to exercise his power over each in turn.

There is very little to redeem Ken Kimble, and it is hard to be sympathetic toward the women who stayed with him. I would not have stuck with this book if it hadn't been a book discussion book.

Would you ever listen to anything by Jennifer Haigh again?

Disgust at Mr. Kimble and all the Mrs. Kimbles

Depressing story and seems to go on and on. I kept waiting for something good or exciting to happen. It didn't. In my opinion, I would save my book credit and pick something else.

A quiet and compelling story.

I had actually read this book when it came out, back in 2003? 2004? and I found it so engrossing that I read it again immediately. Maybe it was because I found this Ken character fascinating and a mystery. He's a low-level sociopath IMO, though I read an interview with the author and she insists he's not. I did find him creepy. Also, by complete coincidence, it was as if she wrote a story about my childhood friend's father. So I had a personal reason to be compelled. Regardless of that, I was completely drawn in, to learn about each woman and what he did (or didn't do) for her. How he was such a chameleon and how, in the end, they were all better off for having known him despite his actions. They were stronger, or comforted by his (limited) companionship, or more clear on what/who was important in their lives.
I listened to this a while ago, but I remember thinking the writing was decent and the narrator, too, though she wasn't super consistent with her accents. But overall, a really good listen.

It's an enjoyable book; the characters are vivid and their struggles are real. Yet the main hero of the book -MR. Kimble- remains a mystery. We want to say, he was a bad guy. But what made him so? What do we know about him? What happened to him in his childhood, perhaps, to make him such a chameleon? What is he thinking? What moves him forward? How does he see life? If these questions were answered, the reader would have an opportunity to enjoy a fuller and more 3D view of the world, created by the author.

He is blameless in all his actions and the women who allowed him to remain blameless.

Excellent study of a charismatic man who loves and leaves three women (usually much younger) while amassing two fortunes and a few children. He disregards his children and wives and is the perfect con man in amassing his fortunes and lovers knowing full well how to play to people's wants and needs.
The narrative is told through his wives and oldest son's perspective. An excellent book on how women enable (most overused word) men to use them in relationships and how children cope with the fallout of divorce and abandonment.
The only negative is during the Joan wife section it got a bit boring, perhaps being in the 70's I'm not interested in my generation.
Highly recommended!
Movie: Can't wait for it.

so good that I'm about to read this on Kindle now. brilliant performance too. Totally engrossing