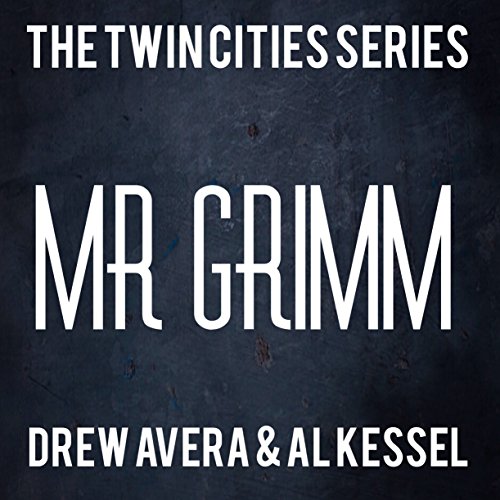 The people of Minnesota believe the twin cities to be Minneapolis and St. Paul, but what they don't realize is the name actually refers to a parallel dimension known as The Realms, where creatures of myth roam freely. Humans stand only a dimensional barrier away from the most terrifying and horrible monsters imaginable, but there are select few who answer the cries for help, who guard the world of mankind and keep it safe from harm. The Realms can be a place of great danger, as well as great beauty, where love and loss can be sudden and significant, but make no mistake... in this world, humanity is just another word for powerless. Alexander Grimm has been sentenced to a life of servitude. His services are rendered to a man who calls himself The Raven, but he is more than a man. He is a vampire. Grimm has done The Raven's bidding for twenty years with the life of his daughter, Angelica, hanging in the balance. Someone in The Raven's Court has approached the man known in The Realms as "Mr. Grimm" with a choice: Continue killing for fear of losing his daughter, or give his life to ensure that The Raven can never hold her life in his hands again. Which will he choose?

Grimm's point of view we learn that he is a vampire killer and slave to the Raven , bound to his master by blood to save his daughter's life.This is a classic paranormal-vampire story. The narrator's voice is very complimentary to the whole story..

Mr. Alexander Grimm is in servitude. The Twin Cities (Minneapolis & St. Paul) is a special place, concealing a door into The Realms. This is not good for humans as The Realms contain things of myths and legends such as vampires and demons. Mr. Grimm serves The Raven, who rules over The Realms with an iron fist. But several factions with The Realms would like to see a change in leadership. Mr. Grimm may be the key to that change.

This was a dark urban fantasy that was treat to listen to. Avera has created a noir world, albeit much of it behind the scenes. It’s gritty and dangerous, with things waiting the shadows. I loved the mystery to the story, the hint of deeper secrets to be told in forthcoming installments. Mr. Grimm is a deeply conflicted character. He’s in servitude to a vampire (that he hates) and yet he is pretty darn good at carrying out his job – taking out anyone The Raven points his finger at. He has a daughter he must protect at all costs and as the years go by, that cost becomes steeper and steeper.

I only have one quibble. There was a leap in time in the storyline and it had me slightly confused for a bit. During the first part of the story, Mr. Grimm is a family man, but then we move forward a decade or so. Perhaps the first part of the story was flashback for Mr. Grimm? I’m still not sure. Despite that, I thoroughly enjoyed this book. The secret world that Mr. Grimm moves through was intriguing and I look forward to listening to future installments of this series.

Narration: Al Kessel did a great job. He was a good voice for Mr. Grimm. He also did a few accents competently and had distinct male and female voices. His French vampire is entirely creepy, in a sophisticated way.

What I Liked: Dark, noir feel to the story; plenty of mystery left to explore; intriguing characters all over the place; Mr. Grimm is left in an impossible position.

What I Disliked: I didn’t like the cover for the audiobook; there is one time leap in the storyline that caused some little confusion.

Would have been 5 star read if more in depth

Which character – as performed by Al Kessel – was your favorite?

Al Kessel done a fabulous on all of the characters. I think he embodied all the was Mr. Grimm. He keep my attention the whole time.

Yes. It was short enough that I was able to listen to it in one sitting. Which is good since I didn't want to put it down.

The only problem that I found was, I felt like it was just getting into the story good when it stopped. I would love for Drew Avera to elaborate more on this story. Other than that, this is one of the best audiobooks I have listened to.

The most original story in a long time!

Would you listen to Mr. Grimm again? Why?

Yes it is amazing story!

Everything well written and presented

I think the struggle with what he HaD to do to protect his child from his wife who was a vampire.

The audiobook was given to me in exchange for honest reviews. I had never herd of this story bit it is interesting fantasy typetype. The maim character Alexander Grimm is fighimg his own mistakes and demons. He is in the otherworld realms trying to make up for what he had done I'm life
The story has vampire theme and does contain adult language. It is, however, a great story and is one I will enjoy again. The narrator was Al Kessel and he has a amazing depth and pitch in jos readings and it a great talent!

Mr. Grimm is up a creek without a paddle

Would you consider the audio edition of Mr. Grimm to be better than the print version?

What was one of the most memorable moments of Mr. Grimm?

The death of his wife had the be the most memorable and heart breaking moments in the book. The fear and love he felt was heart breaking.

Have you listened to any of Al Kessel’s other performances before? How does this one compare?

I have not heard any performances of Al Kessel before, but I do think he did a great job with Mr. Grimm. He didn't sound like a robot and had good inflection in his voice, with proper enunciation.

The fear he felt for his daughters safety and knowing he alone held the key to her wellbeing was particularly moving.

I think this story was way too short, it seemed like as soon as i started getting into it it was over. If they combined the first few books then maybe it could complete the story line. It also seemed to jump around a lot making it kind of confusing.

Relatable, protective, and a seeker.

Mr. Grimm. I am able to relate to him, because through out the entire book even when in another relm it was believable. He goes through challenges everyone faces in one form or another. I hope to find out soon about what happens.

He kept my attention the entire time, and his voice portrayed the characters well.

Yes! However, I had to break it up into two, and was left with a hanger when it ended.

I cannot wait until there is another out! Really enjoyed myself listening to a great book!

If I had to sum up Mr. Grimm in three words. I found it interesting, different, and good. There are many more than three words to describe this story. Irony?

Mr. Grimm. He was willing to do anything to save his daughter which shows he has a conscious. But he was who he was. A killer. I like the idea of "The Realms" which I interpreted as maybe a place in the middle like a portal. I also liked when he called on Geneveve and she knew his real name.

Al Kessel's performance was excellent. He was perfect for this story. He has a good tone and good voice inflections.

No extreme reaction. I wish this were a longer story.

I received this audiobook foc in exchange for an unbiased review.

Would you consider the audio edition of Mr. Grimm to be better than the print version?

I have not read the print version

I loved the different voices which gave each character in the story a unique personality.

He made the characters more real and gave them dimension. His voice was a perfect fit. He brought the characters to life, and entertained you with an enjoyable listen.

A great paranormal vampire story. The narrator was a great fit. Plenty of urban, mystery and dark fantasy here.

Would you try another book from Drew Avera and/or Al Kessel?

Mr Kessel does an ok job narrating this story.There just seemed to be too little story to flesh out the character.

Could you see Mr. Grimm being made into a movie or a TV series? Who should the stars be?

This was a very short read.I was given a code for a free review.I was not really impressed with the story.There was not enough information to flesh out the characters or really understand what all was going on.Mr Grimm is under control of a Vampire in what seems to be a vampire universe.His daughters life is held as ransom.Mr Kessel,the narrator did an ok job with the material,but there did not seem to be a lot to work with.

Enjoyed the story, but the narration was difficult

Where does Mr. Grimm rank among all the audiobooks you’ve listened to so far?

I enjoyed the story, but the narration lacked emotion and was read with too even of a tone. I wanted more inflection and energy. Will try some of the other books as the story was interesting.