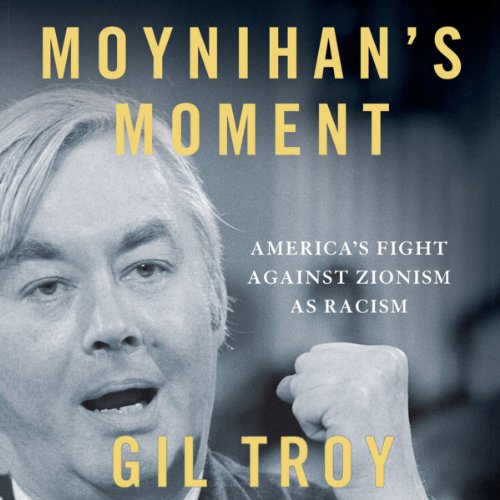 On November 10, 1975, the General Assembly of United Nations passed Resolution 3379, which declared Zionism a form of racism. Afterward, a tall man with long, graying hair, horned-rim glasses, and a bowtie stood to speak. He pronounced his words with the rounded tones of a Harvard academic, but his voice shook with outrage: "The United States rises to declare, before the General Assembly of the United Nations, and before the world, that it does not acknowledge, it will not abide by, it will never acquiesce in this infamous act." This speech made Daniel Patrick Moynihan, the U.S. ambassador to the United Nations, a celebrity, but as Gil Troy demonstrates in this compelling new book, it also marked the rise of neo-conservatism in American politics - the start of a more confrontational, national-interest-driven foreign policy that turned away from Kissinger's detente-driven approach to the Soviet Union--which was behind Resolution 3379.

Moynihan recognized the resolution for what it was: an attack on Israel and a totalitarian assault against democracy, motivated by anti-Semitism and anti-Americanism. While Washington distanced itself from Moynihan, the public responded enthusiastically: American Jews rallied in support of Israel. Civil rights leaders cheered. The speech cost Moynihan his job - but soon won him a U.S. Senate seat. Troy examines the events leading up to the resolution, vividly recounts Moynihan's speech, and traces its impact in intellectual circles, policy making, international relations, and electoral politics in the ensuing decades. The mid-1970s represent a low-water mark of American self-confidence, as the country, mired in an economic slump, struggled with the legacy of Watergate and the humiliation of Vietnam. Moynihan's Moment captures a turning point, when the rhetoric began to change and a more muscular foreign policy began to find expression, a policy that continues to shape international relations to this day.

What listeners say about Moynihan's Moment

This was a very promising book. I am very interested in Moynihan, the time period (through which I lived), US-Israel relations, the United Nations. Perfect ingredients for an entertaining & intellectually-satisfying book. The book is well-written in the sense that the vignettes and anecdotes it contains are generally well-written (if a bit biased at times, or at least lacking the analytical breadth to understand the position of the "other side"). But the book seems disorganized, perhaps more so because it is an audiobook and not a hard-bound one. But I suspect both suffer from a weak outline and from the absence of a strong editorial hand. I enjoyed parts of the book as I went along, and I suppose it could be satisfying on those grounds alone. But I am sure there are better treatments of Moynihan (e.g., biographies) and I know there are better ones on US-Israel relations, the UN in the 1970s & 1980, dealing with the egomaniacal Kissinger and so forth. There are a couple of highly-rated Moynihan books on Amazon (Audible's parent), although not in audio form. I am going to try one of those next.I am sorry I could not give this book a stronger review.

This book was brilliant, I just wish it had a better narrator. The mispronunciations of Jewish names and organizations was distracting and irritating.