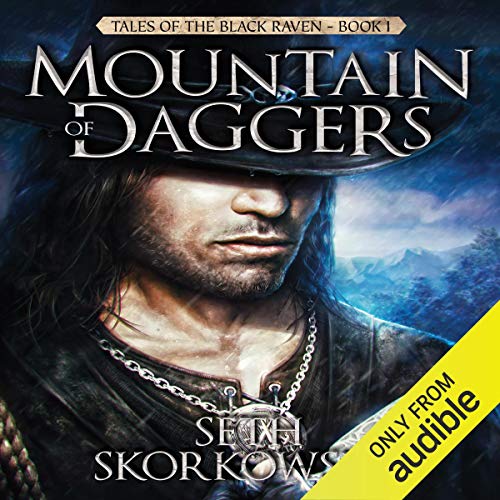 One part James Bond, two parts Gray Mouser, Ahren the Black Raven fights demons, duels beautiful assassins, and steals the rarest of treasures, all while dodging an endless army of bounty hunters on his trail. Mountain of Daggers is the first collection of fantasy tales by Dämoren author, Seth Skorkowsky. Some call him hero. Others, a menace. But everyone agrees that Ahren is the best thief in the world. Whether he's breaking into an impregnable fortress, fighting pirates, or striking the final blow in political war, Ahren is the man for the job.

After being framed for murder, his reward posters have named him The Black Raven. In order to survive, Ahren finds himself drafted into the Tyenee, a secret criminal organization whose influence stretches across the world. Their missions are the most daring and most dangerous, and the penalty for failure... is death. When no one else can do it, they send The Black Raven. Mountain of Daggers is the first book in this collection of tales by Seth Skorkowsky, the author of Dämoren, book one of the best-selling Valducan urban fantasy series.

What listeners say about Mountain of Daggers

I really hope to see a followup soon!

I was a fan of the author's Valducan urban fantasy books, so I thought I would give this a shot. i'm really glad I did. The stories revolve around a thief named Ahren, who ends up joining The Tyenee, the secret thieves guild, after he is betrayed on a job. He is branded the Black Raven because of the betrayal, and is convinced by a Tyenee leader that it is a good nickname. In fact, he leaves black raven feathers at the scenes of his crimes as a calling card. He has a series of adventures, with successes and failures, all the while fighting against an enemy that has the power of a demon to assist them. The characters are compelling, especially Ahren, and he has more than his share of failures to go along with the triumphs, including losing someone very close to him. The villains are well thought out, with the actions scenes being exciting an believable. The villains are not over the top Bond villains, but realistically written. I am really excited to see where he takes the character in future books. Any fan of Alex Bledsoe's Eddie LaCrosse books or Brent Week's Night Angel books should really enjoy this book.

Would you try another book from Seth Skorkowsky and/or R. C. Bray?

This is a collection of short stories with the same characters in the same world. I would have preferred a single story.

The production is well written and excellently performed. i highly recommend it. buy this book.

I drive truck for a living. I read his Vuldacan series. So when I joined audible, I decided to try his Black Raven series. I was not disappointed! A great listen if you do lots of driving. R.C. Bray was a great narrator. Highly recommended.

What did you love best about Mountain of Daggers?

Every story was excellent and captivating. I was always satisfied by the conclusion of one story straight into the middle of the next.

Ahren was by far my favorite; his character development was fantastic and I really fell in love with him.

What does R. C. Bray bring to the story that you wouldn’t experience if you just read the book?

Yes! I found myself sitting in my car after work trying to finish a chapter before heading inside.

Very much enjoyed this book. It was an excellent mix of tales of thievery, intrigue, and suspense. I also loved how each ending had a slight twist that I didn't see coming. I am very much looking forward to the sequel that comes out soon.

What about R. C. Bray’s performance did you like?

Tales of the Black Raven

Really good book, it reminds me of an assassin creed game. Can't wait for book 2, Sea of Quills.

I kinda like the multiple short stories it allows for more interesting things to happen with no drags.

Not bad, could’ve been better.

Each of the short tails were pretty good. But would have been much better as a complete story.

Not what I wanted

I adored the Damoren series. Skorkowsky has a way of dragging you into the story almost right off the bat, and I was waiting impatiently for this one. My issue? I was hoping for a story about Ahren the Black Raven and not just a bunch of random stories about his adventures. I will probably return this since although each story is good none of them really go anywhere or get in depth with the characters (understandably since there is not enough time in a 30 min story) and I don't like that. I hope Skorkowsky writes another book about the Black Raven because I'd like to read more about him than just his jobs as a thief. The potential is there and I am feeling very let down.

A different way to see thieves

A great book with vivid descriptions that make it easy to read and see in your mind's eye what is going on. Each chapter is a story in itself within the book. I loved each story as it was always a new feat and yet allowed time to pass within the world without doing the in-between filler that often spoils a book. Well written, and can't wait to read book two.