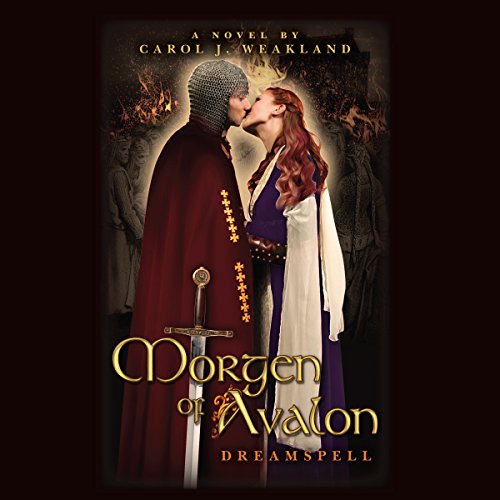 By: Carol J. Weakland
Narrated by: Carol Weakland
Try for $0.00

She was King Arthur's healer, his love, the Faerie Queen destined to help him evoke peace throughout war-torn Britannia. And so, Avalon's brightest hope became human.

Mortality proves a double-edged sword that dulls Morgen's memories, especially when fate separates her from Arthur at birth. Magical in every sense of the word, the newfound princess so irritates King Uther Pendragon that he imprisons her in a nunnery where she forgets her purpose - even her connection to Arthur. What can she have in common with a brother who instigates bloodshed every time he enters a battlefield? How can they share the same peaceful goals?

Darkness clouds all perception until Merlin, a mysterious enchanter, captures Morgen's affections. This arch mage holds the key to uniting warrior and fairy, if he ignores the secret longings of his own heart. Passion and prophecy consume Morgen as she finds herself torn between two vastly different men while the battle for Britannia increases its fury.

Set amidst the backdrop of King Arthur's turbulent rise to power, Morgen of Avalon: Dreamspell is the first in a series of romantic fantasy novels that introduces Arthur and Morgen as star crossed lovers - not the typical adversaries found in many Arthurian novels. Will their love be strong enough to override convention and free Britannia once and for all?

What listeners say about Morgen of Avalon: Dreamspell

Being a huge Mists of Avalon fan, I was hoping for another legend book from the female persp. I gave it a try, but just can't seem to enjoy it. Part of the problem is the voice of Morgan...too girlish for the character as I see her. Returning this one.

Arthurian tale from a female perspective

It's unusual to find a King Arthur story told from a female perspective, and Carol Weakland does it well. She has created well-rounded characters within a vivid storyline. Ms. Weakland's narration is also excellent and helps bring her compelling story to life. She has distinct voices for each character, making it easy to get pulled into the action of her story. This is a book for Arthurian fans, as well as those who appreciate stories of strong and spiritual women.

This is a captivating and beutifully written story, which will appeal to anyone who loves to read stories based around the legend of King Arthur. Additionally, the audio version is read by the author herself, and she has a wonderful voice for audio book narration, which makes for a fantastic listening experience.