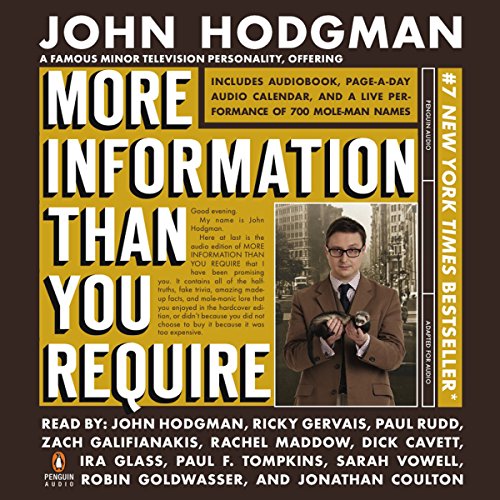 More Information Than You Require

PLUS: This recording includes ALL 700 MOLE-MAN NAMES as they were written and subsequently performed LIVE BEFORE A STUDIO AUDIENCE in an underground lair in Brooklyn, N.Y.

"In every way a continuation of Areas of My Expertise, except in the ways it's clearly superior....More Information Than You Require is exactly the tonic for these truth-challenged times: a transformation of pedestrian reality through the enlightened power of imagination and insatiable list-making." (The Onion A/V Club)
"I love this book so much I nearly read it." (Justin Long)

What listeners say about More Information Than You Require

Hodgman is great! His fake “information” is delightfully imaginative and intelligent. He is joined by several guests in his narration of the book's first half, all of whom add to the high spirits. Numerous “Easter eggs" show up for those who happen to be familiar with a particular field of knowledge. I really enjoyed these when I got them, but I'm sure I missed many.

The second half of the book consists of his “It Happened Today” daily calendar (previously podcast) and an enumeration of literally hundreds of identifiers of “molemen”. This half is best appreciated in small doses as it can be a bit much when taken in large quantities.

I call it a performance because it is not just an audiobook being read, it has the feeling of a comedy skit being performed. I would often listen to audiobooks on the tram to work, but I couldn't with this one. I would burst out laughing too often and receive some crazy looks. Absolutely funny. Well worth the credit. Hihgly recommend.comedy

I got the distinct feeling reading this book in dead tree that he'd almost intended it to be heard rather then written. It is exactly that. The audio book is nearly a show performance with guest stars Jonathan Coulton, Rachel Maddow and others joining in. Hodgman snipes with his "troubadour" constantly, yet the obvious fondness for the material shines through. It is clear and side-achingly funny the entire go. The book is shockingly content packed, and probably one of my favorite audio books in my collection all ready. If you enjoyed the first book, do not hesitate. You will enjoy the material. If you didn't like the second book, try it in audio format. If you didn't enjoy either book, you're soul is worn out. Go down to the local SoulHut and get a new one. Preferably one in a bigger size.

I had previously read this book before purchasing it on Audible and it STILL had me in hysterics. This is a definate MUST OWN if you have ANY bone of humor in your body.

HIlaarious--If you have a sense of humor.

John Hodgman, and his companions on this audio, deliver an amazing performance of dry wit. Hodgman's satiric fake trivia book is only heightened when delivered in this easy-going performance, seeming more like an episode of This American Life than an audiobook reading. If you are a fan of the dry humor of The Office you will very much enjoy this audiobook.

Wow! This is hilarious and brilliantly performed.

This is hilarious. John Hodgman and his slew of guests make this the best audiobook of humor that I have ever heard. Look at the narrator list to see the who's who of those that stop in. I own the book and yet these performances make the material ten times funnier plus there is the added scripted improve that goes above and beyond the page. I will listen to this again next week.

Must have for any listener of any age

I knew this was a good purchase the minute I played the audio book. Hodgman's tongue-in-cheek humor throughout the book will make people around you stare at you as you laugh out loud as if you're crazy. There is so many content and little things in just one sentence, that you can listen to it time after time and still find it interesting. Including the added bonus of Coulton and others, this is more then just some guy reading a book to you, but an actual performance. I would recommend this book to anyone.

This book is certainly no "Going Rogue"

... Thank god it's not. This audio book is so funny. I enjoy the quick random humor. If you do not understand deadpan, sarcastic, witty humor then this book is not for you. If you enjoy NPR, This American Life, The Onion, the daily show, Found Magazine or if you simply enjoy watching Sarah Palin speak (merely for ironic purposes of course) then this is the book for you.
There are a couple points where it is a little dry, but honestly I was laughing so loud I had to shut my office door. Really this book is the way to go.
For those of you who don't quite understand what this book is about let me lay it out very simply, it's a book about lies. Do not take it seriously! He made up all the facts. So if you want to hear some really funny "mostly lies" then this is the way to go.

Better buy than the book? Definitely.

With all of the hilariousness this book contains, there is no better person to recite the absurd, beautifully crafted non-knowledge and anti-trivia within it than (world-renowned Judge) John Hodgman himself.

He makes it funny, his special guests make it incredible, and the extra content makes it indispensable to anyone who finds themselves with too much time and REAL knowledge and trivia in their heads. This will force your dendrites to be regenerated anew with less useful, almost ridiculously impossible “knowledge”, all for the sake of an endless supply of hardy gut chuckles and cheek busting smiles and uproars.

More Than an Audiobook

Even if you've read the physical copy of the book, this audiobook gives so much more. John Hodgman and a number of celebrity guests narrate - and seemingly improvise - their way through Hodgman's second book. It is half audiobook, half podcast, and all hilarious.