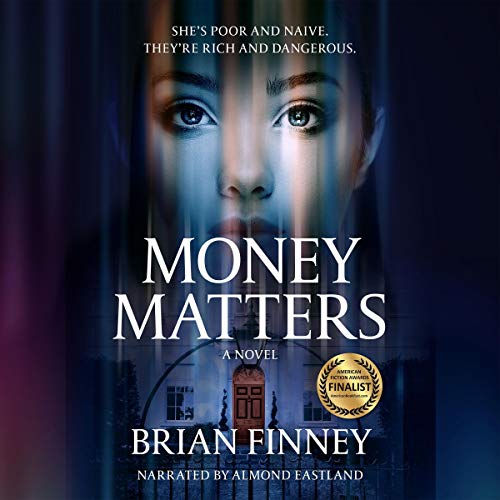 Finalist for the American Fiction Awards in Best New Fiction

She's poor and naïve. They're rich and dangerous.

At once a painful coming-of-age novel, an exciting amateur sleuth tale, and an intriguing narrative involving social issues (immigration and wealth disparity), Money Matters has mystery at its core. This emotionally charged debut novel is firmly embedded in Los Angeles culture over the 2010 mid-term election.

Jenny, the 27-year-old inexperienced protagonist, faced with the tragic disappearance of a friend, is forced to take on financial tycoons, corrupt politicians, and the treacherous Baja drug cartel in her search to uncover the truth. Jenny’s investigation takes her into the twilight world of undocumented immigrants, which leads her to seek the help of the handsome director of an immigrant rights organization to whom she is strongly attracted. But will the deadly enmity of the rich and powerful thwart her search and end her budding romance?

He has published eight books including Christopher Isherwood: A Critical Biography (1979, which was awarded the James Tait Black Memorial Prize, Terrorized: How the War on Terror Affected American Culture and Society (KDP 2011/2018), and Money Matters: A Novel (August 2019), Finalist, American Fiction Awards.

He is married and lives in Venice, California

I loved it! This book caught my attention from the very beginning and held it throughout the entire book. This book is full of action, drama, suspense and romance. The narration was superb and gave the story that extra flair! The author did an excellent job with the character builds and plot. This was my first book by this author but definitely not my last! I look forward to reading more books from this author! I was given this free review copy audiobook at my request and have voluntarily left this review.

This book grabbed me from page one and kept me mesmerized from start to finish. The characters and the plot is outstanding and will make you involved until the end.

It is a story with a unique point of view and even though at times it is a bit difficult to follow, it is worth reading. The mystery is interesting but the focus on the girl's path to truth and her struggles and victories.

Overall, a well-written book. I do not get into a lot of details, because I prefer to let readers find all the surprises and such themselves. The title tells you the basic plot, but I will say that there were some unexpected twists and turns that had me staying up late to finish this one. I recommend it.

As I began the story, it was the magnetic impact that forced me to continue page after page. The story is written too well. It is interesting and gripping that moves in an intriguing and introspecting manner. Liked it much.

I enjoyed the story, character development, and dialogue. There were plenty of plot twists that I didn’t see coming and that added to the book’s mystique. When I stopped reading to work, I found myself wondering what happened in the book, and replaying parts of the novel in my head to see if I could figure more out. It has been a while since I enjoyed a book this much. It’s a first-class mystery, thriller, and suspense with perfect pacing.

Generally I feel that New Adult fiction is still too young for my tastes but Money Matters got me so curious, and I was glad I gave it a shot. The protagonist's view on politics still has me thinking, long after I've finished listening. It's set in 2010 but the topics explored in the novel remain highly relevant to the social issues still present today. Highly recommended.

Where do I even begin? This book is so good! As a millennial who also considers herself as an amateur detective, it was fun to go along with Jenny's adventure. She and her sister Tricia couldn't be any more different, and the tension between them was all too real; anyone who has a sibling will relate. There was a lot going on, but it was so well-paced that I never felt lost. Five out of five stars.

I am a big fan of detective mysteries, and the plot and twists got me hooked. The narration captures every nuance of the unique and engaging characters that the author developed beautifully. A relatable protagonist plus a mystery waiting to be unraveled, with politics on the side and little sprinkle of romance? The perfect combination! Will definitely listen to this again soon.

The story is great. Indeed, in the beginning, it takes time to dive in, but after a few minutes, you literally cannot stop listening to this audiobook. I highly recommend it.

This is incredible story. The author sets a great plot and the characters are colorful. The narrator has done a great job as well. I recommend this book.

This book kept me interested all the way through! I would highly recommend this author, and I'm looking forward to seeing what gets up to in future novels. Well done.

Got the book not knowing how it would be, turned out I liked it. The plot is in itself interesting, but it is only made special by the overall features of the main character. It is an interesting story indeed.

This book kept me interested all the way through! The insight into a different culture was fascinating. I would have liked to see a little more showing and not telling, as there were parts that tended to have a surplus of description, however that seemed to be the individual style of this book, which I came to appreciate as I continued to read.

The story grabs you and the beginning and keeps you wanting to know what is happening on the next page. So much entertaining and exciting.

It Really Made My Day

The cast of characters in this book was interesting: two sisters with different outlooks, a nasty CEO and his wannabe politician brother, two undocumented immigrants, a deadbeat boyfriend and a new love interest… The cast made it worthwhile. Narration was also good and the accents sounded authentic. A slow paced but entertaining book.

Simple enough to follow but complex enough to be interesting. The story takes place in Venice, CA, and the author provides enough setting to show you this small hipster town in transition. I also liked the dynamics between Jenny (main character) and her sister, as well as her boyfriend. Lots of conflict outside of the murder investigation itself.