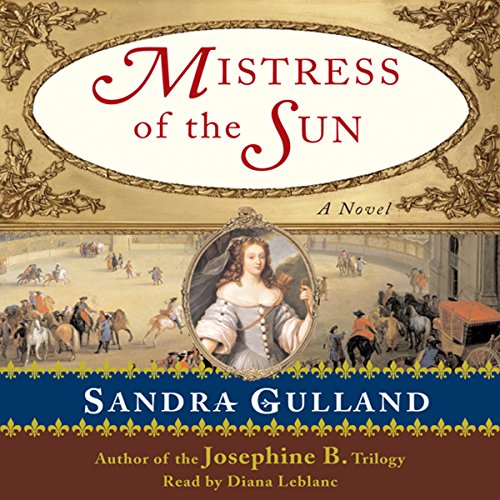 Mistress of the Sun

By: Sandra Gulland
Narrated by: Diana Leblanc
Try for $0.00

Set against the magnificent decadence of the 17th century court of the Sun King, Mistress of the Sunbegins when eccentric young Louise falls in love with a wild white stallion and uses ancient magic to tame him. This one desperate action of her youth shadows her throughout her life, changing it in ways she could never imagine.

Unmarriageable, and too poor to join a convent, she enters the court of the Sun King as a maid-of-honor, where the King is captivated by her athleticism and her striking grace. As their love unfolds, Louise bears Louis four children, is made a duchess, and reigns unrivaled as his official mistress until dangerous intrigue threatens her position at court and in Louis's heart.

A riveting love story with a captivating mystery at its heart, Mistress of the Sun resurrects a fascinating female figure from the shadows of history, and illuminates both the power of true and perfect love and the rash actions we take to capture and tame it.

What listeners say about Mistress of the Sun

A pleasant surprise - had trouble adjusting to narrator accent but once I did - the book is very involving-couldn't wait to finish it. Good, smart interpretation of one of Louis XIV mistresses. Good Story - worth listening to.

This is a wonderful tale, it carries you through the lifetime of a mistress at King Louis Court-I did not want it to end.

I love the story! Well written! The narrator is so annoying I’m not sure I will be able to finish listening! I may have to buy a paperback! Her modulation and cadence is just awful! Volume levels up and down!

Narrator ruined it for me

Not to be unkind, but the book needed a younger crisper narrator. Diana Leblamc sounded like a grandmother reading a bedtime story to children. At times she sounded like she needed a drink to clear up her throat. I almost didn't finish the book because of her, but I forced myself. What a pity......please cast your narrators with a better ear.