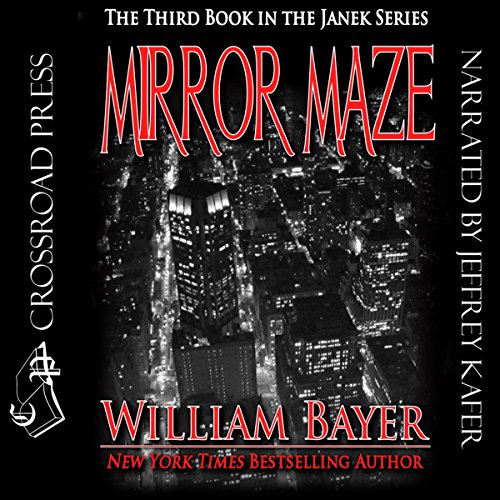 A secret hall of mirrors, a labyrinth of fear: Janek returns in a hypnotic thriller...

Nobody writes better psychological thrillers than William Bayer. And no character in contemporary crime fiction is as compelling or complex as Lieutenant Frank Janek of the N.Y.P.D. Now Bayer and Janek are back-in a brilliant novel of terror and excitement.

A beautiful young woman meets her latest "pickup" in a Manhattan hotel bar and goes back with him to his room, where she drugs him, robs him, and humiliates him. Several hours later, the "mark" is found dead, the mysterious young woman is wanted for the murder, and Janek and his team of detectives are assigned to the case. Simultaneously, Janek becomes involved in the reopening of a grisly society-murder investigation that has plagued Internal Affairs for nine years. As he sets out to solve both puzzles, the present and past eerily dovetail, culminating with a deadly battle in a secret mirror maze hidden beneath a "ghost" amusement park.

Mirror Maze sinuously leads the listener through one maze after another - literal, theoretical, and psychological. As with the other best-selling Janek novels, Switch and Wallflower, Mirror Maze is a superb police procedural, tense and violent, as well as a thoughtful examination of the blurring of illusion and reality, guilt and innocence.