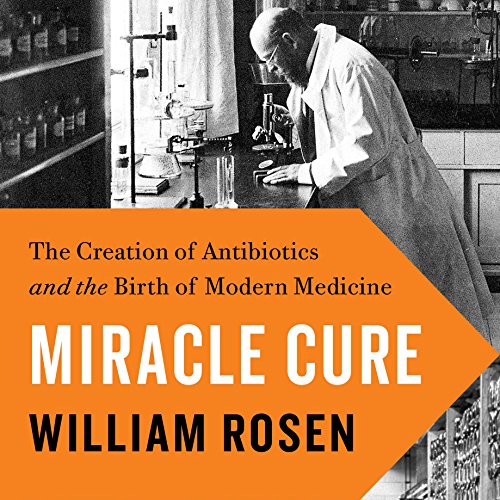 By: William Rosen
Narrated by: Rob Shapiro
Try for $0.00

For fans of Microbe Hunters: the epic history of how antibiotics were born, saving millions of lives and creating a vast new industry known as Big Pharma.

As late as the 1930s, virtually no drug intended for sickness did any good; doctors could set bones, deliver babies, and offer palliative care. That all changed in less than a generation with the discovery and development of a new category of medicine known as antibiotics. By 1955 the age-old evolutionary relationship between humans and microbes had been transformed, trivializing once-deadly infections.

William Rosen captures this revolution with all its false starts, lucky surprises, and eccentric characters. He explains why, given the complex nature of bacteria - and their ability to rapidly evolve into new forms - the only way to locate and test potential antibiotic strains is by large-scale, systematic trial-and-error experimentation. Organizing that research needs large, well-funded organizations and businesses, and so our entire scientific-industrial complex, built around the pharmaceutical company, was born.

Timely, engrossing, and eye opening, Miracle Cure is a must-listen science narrative - a drama of enormous range, combining science, technology, politics, and economics to illuminate the reasons behind one of the most dramatic changes in humanity's relationship with nature since the invention of agriculture 10,000 years ago.

“Rosen’s highly informed retelling captures the drama of scientists’ quest, against long odds, to find and produce bacteria-killing drugs - and the egos, ambitions, brilliance and resolve that drove them.... It is a strength of “Miracle Cure” that Rosen places its many tales of discovery in their larger contexts...an important contribution to a still-germane yet fast-receding history. And it’s all the more impressive that Rosen, formerly a book editor and publisher, wrote it as he was battling his own intractable disease.” (The Wall Street Journal)

“In Miracle Cure, William Rosen tells the lavish story of antibiotics with the flair and skill of a seasoned novelist, portraying his characters as all too-human, the research often fallible but occasionally transcendent.... Rosen's chronological approach gives the narrative its fluency; his wit and vivid detail make Miracle Cure an absorbing read.... A triumph of science writing that deserves a broad popular audience.” (Minneapolis Star Tribune)

"In this assured chronicle of the 20th-century antibiotics revolution, William Rosen delivers reams of science at a thrilleresque pace. The experimentalists - Gerhard Domagk and Howard Florey among them - are vividly portrayed, as are the patients cured, the pharmaceutical corporations created and the moment in 1943 when bacteriologist Mary Hunt found the ancestor of all penicillin used today, on a mouldy melon. Antibiotic resistance and putative solutions are given their due, including Michael Fischbach's work on microbial-gene clusters in the human microbiome." (Nature)

What listeners say about Miracle Cure

Rosen's contribution to the literature documenting the history of modern medicine is of the highest quality. I appreciate that he didn't shy away from discussing specific chemistry as it fit into the story of how medicine got to where it is now. I reread several chapters as I went, not because I necessarily needed to, but because the pace was brisk and there was so much going on that I didn't want to miss out. The fascinating content was non-stop, from the birth of chemistry aka "the dye business" to the discovery of penicillin to the tremendous struggle in attempting to produce it. I would recommend Miracle Cure to anyone with interest in how stuff works, medicine, disease, WWI, history of consumer protection, history of big pharma, etc.

Very intriguing history of antibiotics and to an extent, the development of medicine. The narrator does a fantastic job, smoothly reading over the medical terms with a tone that is easy to listen to. Overall, very enjoyable in both content and delivery.

A compelling tale of medical progress and advance

Where does Miracle Cure rank among all the audiobooks you’ve listened to so far?

One of my favorites. Concise and clear explanations of otherwise complicated topics like cellular biology and chemistry

The competition among German and French scientists is fascinating

Exceptional - Should be Required Reading

An excellent introduction to some of the most ground breaking medical innovations. Also touches on the origins of pharmaceutical companies, the history of medical treatment, pharmacology past and present, the rise of the FDA.
The material in this book is well written, always interesting, and even the chemistry that is discuses is presented so it is understandable.
AND
Rob Shapiro is the Gold Standard of readers....

The history and research for this book was exceptional. An intriguing story and insight into the development of antibiotics and pharmacological.

A cure-all for science writing that bores.

Excellent discussion of the history and key individuals behind the development of the life-saving antibiotics we take for granted today, even though they are becoming less useful thanks to overuse and misuse (as part of animal feeds). The Audible narration is superb.

Mandatory reading for any pharmacist

This should be a part of any required reading for pharmacist, physican, and most other healthcare and anyone interested in medicine